Fortunately for the sport of cycling, the ongoing race radio debate didn’t manifest itself as a rider strike last weekend. This allowed the riders to do what they are paid to do; cycle their bikes. Today, the team manager of Omega Pharma-Lotto, Geert Coeman has announced that UCI President Pat McQuaid is now willing to talk about safety as an issue with respect to the decision to ban race radios in all but the World Tour races.

While it would be easy to bore by going over the same ground covered in this debate over the past few weeks, there are a couple of anecdotes which may be interesting and relevant to the widespread discussion.

Jonathan Vaughters, team manager of Garmin-Cervelo, has perhaps been the most outspoken about the race radio issue. First and foremost, he has repeatedly stated that the threat of strikes and discontent within the peloton is not specifically to do with race radios. The major issue is the more encompassing problem of riders’ lack of representation when it comes to making major decisions which influence their racing conditions. While the larger issue of rider representation is of course an important one, the fact that race radios are being used as leverage should not supersede the fact that the use of radios during races remains a major concern.

Vaughters has also said this week that “I can’t speak for everyone, but my riders are better, tactically, than I am. I’m just an information conduit“. This point is an important one; race radios are used to impart information. He continues by saying “at this level of racing, radios are rarely used for saying ‘go’, instead, [they are used for] weather, roads, time gaps [and] broad strategy”.

The fact that the race radios are rarely used for prompting a rider to attack is not surprising. If the number of potential race winning attacks is divided by the number of announcements made by the team over the radio about road furniture and the race route , the resulting ratio would be almost negligible. While this seemingly inconsequential number of ‘go’ commands has been downplayed by Vaughters, it’s this tiny proportion of instructions which can make or break a race result. But it is not the control of race tactics which is of concern, it is all of the other information which can dictate the race tactics which is the bigger problem here.

Consider the race route information conveyed to riders – is this information that they could have, or should have made themselves aware of before the race?

Fans of any sport tend to think of its professional participants as masters of their craft. This is no different in cycling; riders are finely in tune with their bodies and their bikes have been engineered to near perfection down to the last gram and milimetre. But the race route is an element of the sport which very few riders in any given race could be considered a master of. Consider Edvald Boasson Hagen’s reaction last week to being asked about the route changes in the upcoming Omloop Het Nieuwsblad:

Yesterday I rode part of the new course but to be honest, I don’t remember anything from last year’s course so I will not be confused.

Compare this remarkably aloof attitude with that of the veteran Andreas Klier when speaking about the Tour of Flanders in the March 2010 issue of Pro Cycling magazine:

You can come to Belgium once a year and still know the Kapelmuur. It’s the sections in between the climbs that people don’t know, and that can often be even more crucial. You have to know where the wind comes from on every road.

Not a lot of people know it, but Andreas is the most knowledgeable guy there is when it comes to riding Flanders…[he] knows all these roads, it’s unbelievable. He’ll say ‘Hey guys, in 5km, we turn right’ and we know exactly what’s coming – the stress is taken out of it. But then, sometimes he’ll say, ‘In 10km, you’ll see a green mailbox and we turn right, there we need to be at the front,’ so you move up.

The issue at hand is not the team manager in the car dictating tactics and shouting at riders to attack. The issue is why should Andreas Klier’s local knowledge, gleaned from years of dedication of riding these roads over and over in an attempt to fulfill his lifelong ambition of winning the Tour of Flanders, be neutralised by the instructions provided to every other rider in the race by GPS-equipped team managers? Doesn’t Klier deserve an advantage over riders like Boasson Hagen who haven’t dedicated themselves to their craft half as much as they could?

There are other forms of information which can be relayed over the race radio. There is a well known tale of an incident in the 2000 Tour de France; on Stage 16 to Morzine, sitting 9’03” behind on G.C., Marco Pantani attacked the race leader Lance Armstrong with 120km left to the finish. Panicking, Armstrong radioed back to team manager Johan Bruyneel in the team car to ask what he should do. Bruyneel then rang Michele Ferrari, Armstrong’s doctor, to enquire whether Pantani would be able to sustain his current pace until the end of the stage.

Ferrari, with a vast knowledge of  VAM (and doping) did his calculations and the answer came back to the team car that Pantani would eventually crack before the finish. This message was then relayed back to Armstrong who declined to follow Pantani and the Italian did indeed wear himself out. If there were no radios, Armstrong would have been riding on instinct, which is how it should be. The Texan may have then worn himself out trying to catch Pantani which may have left the door open for Jan Ullrich to win the Tour that year.

As it happened, Armstrong bonked on the final climb anyway, but had he gone after Pantani earlier in the stage it could have been so much worse for the Texan.  We’ll never know what way it might have played out because had instant access to information that he shouldn’t be allowed have access to while a race is in progress. The fans are robbed of a fiery sporting spectacle, as gut instinct surrenders to mathematics and laboratory science. The act of telling Armstrong over the radio not to follow Pantani is secondary in this debate. It is the information behind the decision that is paramount. 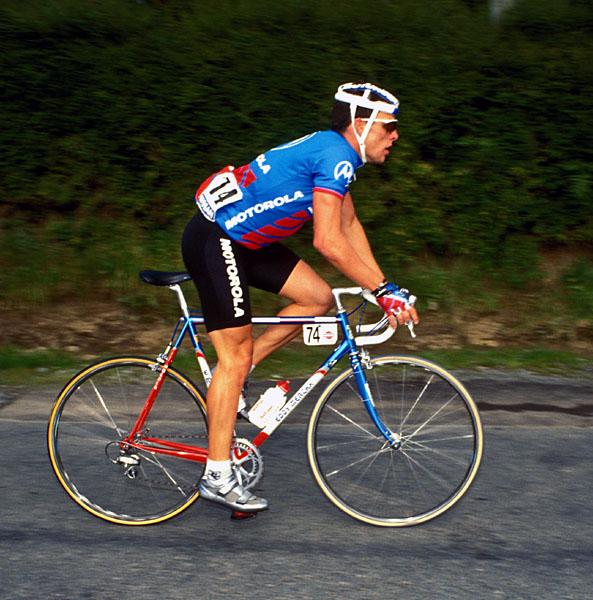 Lance Armstrong rides the Nissan Classic for Motorola in 1992, the team that introduced race radios to the peloton (cyclingnews.com)

The UCI wants to ban race radios. The fact of the matter is, race radios have never been explicitly ‘allowed’. But they weren’t expressly forbidden either,  so the Motorola team in the early 1990s simply started using them. Other teams saw the benefits and followed suit. If the UCI had banned them immediately, there probably would have been no problem, no rider revolt and no rider strikes. The reason for the animosity toward the rule change now is that no current rider has known anything different.

The only logical reason, from a sporting perspective, to keep the radios, is due to rider safety. A problem easily solved by allowing the race organisers to broadcast information on upcoming safety hazards to riders. If there is a facility to inform riders that there’s a parked car sticking slightly out on the road about 500 metres up on the left, then absolutely, that service should be provided to the riders. But there is no reason the same facility should be allowed to be used to warn riders that the bottom of a climb is coming up and that they should change gear accordingly. Riders who already know this information should be allowed to capitalise on their advantage.

To finish, a quote from Christian Vande Velde taken from ‘The Road to Paris‘ video when he was riding for the US Postal Team, managed by Johan Bruyneel, one of the fiercest advocates of race radios:

You become dependent on these radios. You can’t think for yourself so you become braindead.

Perhaps as the race radio ban is implemented in the major races over the coming months, we may start to see more victories by riders who are filled with information which they have bothered to learn before the race begins.