With Goss, his sprinting abilities make Tour de France stage wins and Milan San Remo a distinct possibility while Meyer has already shown that he is capable in week long stage races, making him a possible challenger at Paris-Nice in the future. For Peter Sagan, who is slightly younger than the other two, it is still unclear whether he will become the type of rider that can win Milan San Remo, or the type that could contend in a race like Liége-Bastogne-Liége.

For young riders in general, it is not immediately clear what type of rider they are likely to develop into. Consider the German neo-pro John Degenkolb of HTC-High Road. He has a couple of professional wins to his name already, a stage each in the Volta ao Algarve and the Three Days of West Flanders. A pair of victories which were earned in bunch sprint finishes, but Degenkolb’s future might not necessarily lie as an out and out speed merchant. As an Under-23 rider he bagged a podium place at the Tour of Flanders. He has also placed highly on mountain stages of the Giro della Valle d’Aosta in the past, a race considered to be one of the toughest tests for young cyclists. His future may yet lie as a classics rider, as his 12th place in this year’s Het Nieuwsblad might suggest.

Or consider another neo-pro Michael Matthews of Rabobank who has also taken two sprint victories so far this year, in the Tour Down Under and the Vuelta a Murcia, beating the likes of Andre Greipel and Tyler Farrar in the process. Matthews, like Degenkolb, has finished on the podium of the U-23 Tour of Flanders and has also managed a third place in the Australian national time trial championships earlier this year. Again, Matthews’ future may not be completely sealed as a bunch sprinter.

In general, if you peruse the results of Under-23 races, the same names crop up over and over on the podiums of all kinds of different races. It’s only after a young rider turns professional that their strength which served them so well in a restricted age category no longer yields the variety of victories. It becomes clear that if success is to continue to flow the rider needs to decide which style of racer they want to be, and therefore which specific races they will target.

However, with such a specific skill set required, an under-age race which you might think would be the exception to this rule is the Paris-Roubaix Espoirs. Indeed, when you look at the list of previous podium finishers of this race, the likes of Marc Madiot, Frederic Guesdon, Thor Hushovd and Tom Boonen are there. All winners of the elite Paris-Roubaix and all riders who, having shown promise as a young cobbled classics rider, based their careers around this one race.

Tom Boonen - A triple winner of Paris-Roubaix having twice finished in the top four of the Espoirs edition (2000,2001). (letour.fr)

But take another look at the past podiums of the Paris-Roubaix Espoirs and you’ll find the name of Stephen Roche on the top step in 1980. Roche’s success in this race afforded him the opportunity to make the grade from an amateur to a professional cyclist, as he explains in his autobiography, The Agony and the Ecstacy:

For an amateur in France, winning Paris-Roubaix is a big thing. Normally the race is dominated by Belgians and the roadsides will be full of supporters from Belgium who have made the journey to cheer their riders on. Belgians have the reputation for being hard riders and, with all the cobbled lanes to be crossed, Paris-Roubaix is a race for hard men. I had never even seen cobbles (or pavé) and when I now consider what happened on that day, it seems to me unbelievable. I rode in the gutter at the side of the pavé, on the actual pavé itself and I went from left to right to the middle as if I had been on pavé all through my career. I was more surprised than anybody by the ease with which I went over the pavé.

Victory came at a good time. [A few months previously], I went to (team manager) Wiégant and asked him if I had any chance of getting a pro contract. He asked, what had I done? I listed all my placings, third in Paris-Ezy, ninth in Paris-Troyes, seventh in another, fourth in another. ‘Ah, mon petit’, he said, ‘what are they? They are no reference.’ But after Paris-Roubaix his attitude changed. He told me there was a good chance of a pro contract.

Although it was Paris-Roubaix that launched Roche’s career, he never featured heavily in the professional edition. Having made the leap from the amateur ranks in 1981, Roche took part in the Hell of the North every year until 1984, his best result coming in 1982 when he finished 17th. But by 1985 he had finished third in the Tour de France behind Bernard Hinault and Greg LeMond and his future as a stage race rider was assured. He never rode Paris-Roubaix again. 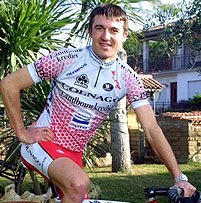 A young Yaroslav Popovych one year on from winning Paris-Roubaix Espoirs, but his future would lie in stage racing. (velomania.fr)

One of the most remarkable aspects of the passage above, is that his victory in the Espoirs race was achieved having never previously ridden on the pavé. This was also the case for the 2001 Paris-Roubaix Espoirs winner, Yaroslav Popovych who also admitted to having never ridden on cobbles before. 2001 was a remarkable year for Popovych, he won the Paris-Roubaix Espoirs, the Under-23 World Cup and the Under-23 World Championships Road Race.

These victories should have made Popovych’s future as a classics rider a no-brainer. But it was his overall success in the mountainous Giro della Valle d’Aosta which steered the direction of Popovych’s career toward stage racing. He did go on to achieve success as a stage racer, riding to 12th place in the 2002 Giro as a neo-pro in his first ever Grand Tour. He followed those Giro performances up with 3rd in 2003 and 5th in 2004. He then won the young rider’s jersey at the Tour de France in 2005. These are not the sorts of performances you would expect from a former Paris-Roubaix winner. Indeed, he didn’t ride the professional Paris-Roubaix until 2009 where he managed a modest 50th place.

There’s also the likes of Thomas Voeckler, who finished second in the Paris-Roubaix Espoirs in 2000 (just ahead of Tom Boonen). But Voeckler has only ridden the professional race a couple of times and has never managed to crack the top 50. Voeckler however has managed to form a career as a very different type of rider with wonderful results, as we’ve seen in Paris-Nice this week.

Dany Baeyens - A forgotten winner of the Paris-Roubaix Espoirs (dewielersite.net)

But, as alluded to before here at IrishPeloton, for every rider who makes it as a professional, there are many many more who do not. Every heard of Dany Baeyens? Or Marc Chanoine? Both winners of the Paris-Roubaix Espoirs in the 1990s, and both signed for the Belgian Collstrop team in the aftermath of their victories. Baeyens won a handful of criterium races before retiring from professional racing at the age of 28. Chanoine fared little better, winning Paris-Troyes in 1999 but little else as he ceased riding professionally in 2003. He’s still only 35 years old.

Roche describes how important race results are so early in one’s career. This kind of pressure to perform can weigh heavily, the results of which have manifested themselves in a deplorable tale. The 2007 Junior Paris-Roubaix winner has recently admitted to doping since the age of 19. In an interview with DirectVelo.com he said:

The professional peloton, it’s a world that does not laugh. I was not in shape. With the help of some people, I arrived at the point of doping myself. I overlooked the most important things for a rider, namely training, nutrition and sleep. I replaced all of that with doping.

A stark reminder of how the yearning to succeed and the fear of failure is capable of corrupting the youthful generation of the sport.

‘Luck’ would be an inappropriate word to describe success in such a physically demanding support. But John Degenkolb and Michael Matthews are certainly fortunate enough to find themsleves amongst the cream of the crop who have shown the courage and mental toughness to make a successful move from the under-23 ranks to the big boys. Another is the American Taylor Phinney, who has won the past two editions of the Paris-Roubaix Espoirs. It remains to be seen whether Phinney will ride Paris-Roubaix this year for the BMC Racing team where he would be guided by veteran George Hincapie. But over the coming years, Phinney may well equal Marc Madiot’s achievement as the only rider to have the won both the Espoirs and professional editions of Paris-Roubaix. For the moment however, Thor Hushovd will be the rider in with the best chance to do so, having won the Espoirs version back in 1998. And thanks to race organisers ASO who have financed the Espoirs race as it was on the brink of extinction we are likely to see more and more youngsters attempt to follow in the footsteps of the current elite World Champion.

Currently, we are inundated with young cycling talent that can challenge for victories in the professional cycling peloton; riders that have stubbornly avoided the sporting oblivion into which many successful amateur cyclists find themselves in. It will be fascinating to watch how each of these riders hone their skills and focus their aspirations in the coming years. How about a 2011 Milan San Remo podium of Sagan, Matthews and Degenkolb? It is probably a bridge too far too soon for all of them, but not for much longer.