Philippe Gilbert is on some roll. The stats from his classics results in the past few years come up in the posts here quite often, but they are certainly worth repeating. In the five monument classics (Milan-San Remo, Tour of Flanders, Paris-Roubaix, Liege-Bastogne-Liege and the Tour of Lombardy), of the last nine editions that he has entered, he has finished in the top 10 every time. He is almost a certainty to make it ten in a row in Liege-Bastogne-Liege this weekend.

Amstel Gold, Fleche Wallonne and Liege-Bastogne-Liege are the three races which collectively make up Ardennes week. Recently it has come to be referred to by some as ‘drugs week’. If you look back over the list of recent winners in these races it’s easy to see why. Alexander Vinokourov, Davide Rebellin, Alejandro Valverde, Stefan Schumacher and Danilo Di Luca have all dominated the last decade in these races and have all been suspended for doping misdemeanors in the past few years. 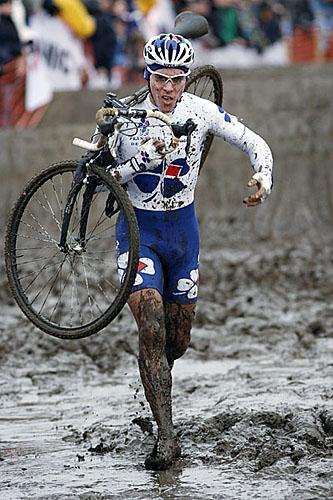 Gilbert is widely regarded as being as clean a rider as they come and by winning Amstel Gold and Fleche Wallonne already this week, he is certainly doing his bit to clean up the doping moniker which has been attached to these races. He is also on the cusp of making a little bit of history (as if he hasn’t already)
He is only the third man to have ever won the Amstel Gold and Fleche Wallonne in the same year after Rebellin and Di Luca achieved the same in 2004 and 2005 respectively. In 2004, Rebellin also did what no had done before, or has done since, and also won Liege-Bastogne-Liege to complete the Ardennes hat-trick. Gilbert will be trying to become the second rider to do it.

An Amstel/Liege double is rarer having only been achieved by two other riders apart from Rebellin. Eddy Merckx did it twice in 1973 and 1975 and Mauro Gianetti did it in 1995. Gilbert will be aiming to get add his name to both those lists of double winners, and also to the list of triple winners.

In 2009, Gilbert won four one-day races in a row. He won the Coppa Sabatini, Paris-Tours, the Giro del Piemonte and the Tour of Lombardy, all within the space of ten days. Gilbert also won Brabantse Pijl a few days before the Amstel Gold Race, so should he win Liege-Bastogne-Liege on Saturday he will repeat this feat of winning four one-day races in a row within the space of ten days. A nearly impossible fact to research, but I’m sure there can;t be too many riders who have managed an amazing set of performances such as this on two occasions in their career.

The question for all his rivals will be, after such dominant displays so far in the Ardennes, how on earth is anybody going to stop him? What is even more worrying for everyone else is that Liege-Bastogne-Liege is actually the race that Gilbert has wanted to win more than any other.

Drugs Week in the Ardennes
The Most Versatile Classics Rider in Cycling
Roche, the UCI and the media scrum
Italians at the Classics – The Tour of Flounderers
The 2011 Tour de France by numbers