Oh, to be a cycling fan

Cycling is a peculiar sport. It’s difficult to explain to the non-enthusiast. Do you start with the difference between stage races and one-day races? Do you explain why, despite winning the most stages in each of the last three Tours de France, Mark Cavendish will never win the Tour? Or do you explain that even though one rider gets to celebrate winning at the finish line, cycling is in fact a team sport?

The team vs. individual element of cycling is perhaps the oddest, but it is the most important to explain to newcomers to the sport. The best avenue of enlightenment is to sit the person down and make them watch a race. Once the concept of drafting and energy conservation is explained, I find the rest falls into place rather easily. In fact, people get intrigued quite quickly and amazed at the fact that riders are literally sacrificing their bodies for a designated team leader.

The slipstream effect is crucial to understanding racing. (cyclingnews.com)

But once the fact that cycling is a team sport is established, the next hurdle is explaining that fans don’t tend to support any particular team. There are fans that would choose not to support a particular team, mostly for doping-related reasons. For instance, there are those that don’t like RadioShack because of the Armstrong/Bruyneel factor. By the same token, there are those who dislike Leopard-Trek, Geox-TMC and Saxo Bank because of Kim Andersen, Mauro Gianetti and Bjarne Riis respectively.

There can also be a certain sense of schadenfreude amongst some fans when the PR-heavy self-trumpeting teams like Garmin-Cervelo or Team Sky perform particularly poorly. But for the most part, fans have a certain clutch of riders from various teams who they like to see succeed, with whom they may or may not share a nationality. Indeed for most cycling fans, the identity of the winner plays second fiddle to the desire that it is simply a good exciting race.

I came across a case in point recently when listening to the Flammecast podcast. John and Derek were chatting to Daniel Benson, the editor of Cycling News, about the recent Tour of Flanders. They had talked enthusiastically about one of the most exciting races in recent years for about ten minutes before one of them eventually realised that they had yet to mention who won the race.

But it is this aspect of cycling, the fact that there are no real team affiliations amongst fans, that makes cycling so different, as a fan, to football, the one other sport that excites me as much. In football, the result is everything, the three points at the end of the day are paramount, to the team and to the fans. Whereas with cycling, the result is important to the teams of course, but for the fans, how the race was won is much more important.

For instance, ask yourself can you remember who won the stage of the 1988 Giro d’Italia in the snowstorm when Andy Hampsten took over the Maglia Rosa and went on to win the race? Or who won the Tour stage when the famous battle between Jacques Anquetil and Raymond Poulidor was taking place on the Puy de Dome? Can you remember who won the Mont Ventoux stage in 2009 when Andy Schleck tried to drag his brother on to the Tour podium while Contador strolled to overall victory? Or who won the stage in last year’s Tour when the chaingate incident happened? 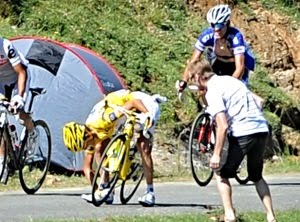 Can you remember who won this stage of the Tour in 2010?

Try imagining a Man United or a Chelsea fan sitting down to watch the Champion’s League Quarter Final Second Leg next Tuesday and saying ‘I just really hope it’s a good game’. Nonsense. Fans of both teams would be happy to sit through the most dour, dreary, dismal display if it meant their team qualified at the end of the tie.

The fact that cycling fans tend not to have any particular affiliation with a team makes the pre-race, in-race and post-race chat with cycling enthusiasts so interesting and engaging.

If I think that Cadel Evans has a good chance of winning a race, people are willing to listen to my reasons for this. Somebody then might come back to me and say that “I think Robert Gesink has a better chance, and here’s why“. In my experience, the conversation is based on reason and is always civil and (almost) always intelligent. Arguments are presented based on previous results, current form and possible goals and ultimately people may agree to disagree, but most are willing to have their opinions challenged and perhaps changed based on a decent argument.

Compare this with football fans (now, I say ‘football fans’ as if they are a completely separate breed quite apart from cycling fans; I am both, as I’m sure many are), the difference is startling. When Fernando Torres played for Liverpool, fans of Chelsea (amongst others) mocked him for looking feminine and wished him nothing but misfortune. But literally overnight, £50 million later, he became Chelsea’s saviour, a new demi-God to be worshipped at the alter of Stamford Bridge. The fact that he is ‘half a girl and half a boy’ soon disappeared from the arsenal of chants on match days. The only thing in cycling that compares with the blinkered tribalism exuded by football fans is the Armstrong/Livestrong brigade which staunchly defend every word and action by the seven times Tour-winner. But they are a minority and are avoidable.

But trawl for a moment amongst the plethora of online football forums and the vitriol and hate that certain fans have for other teams, simply because they are not their own, is pitiful. The forum comments are littered with f-words, c-words and even n-words. If somebody tries to make a reasonable point, he may be shouted down with cries of ‘scouse bastard’, ‘cockney wanker’ or ‘Leeds scum’ by people who don’t even read what he has to say. Fans are blinded by their unwavering, thick-and-thin support of their own team and are not willing to listen to polite and rational arguments which may paint their precious football club as anything but the upstanding pillar of society with which they hold it in their own minds.

How refreshing it is to be a cycling fan.

I think Alessandro Ballan will win Paris-Roubaix. I think Vino will win Liége-Bastogne-Liége again and I think, if Contador is banned, that Robert Gesink will win the Tour de France.