So, recently I got a little bit carried away in my quest to find and purchase every cycling book that exists in the internet and I ended up ordering two of the same book. The book in question is In High Gear by Samuel Abt and I’ve come up with a rather ridiculous way of giving it away in a competition. 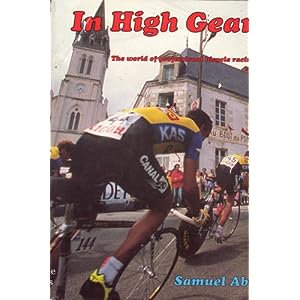 Below is a youtube video of me attempting to do impressions of three famous cyclists. The first person to email me with the name of all three cyclists gets the book. If, as will probably be the case due to my woeful artistry on the bike, nobody gets all of them right, I’ll give the book to whoever gets two right (or one), if that proves to be the case.

The email address is mail-at-irishpeloton.com and the cyclists can be from any era. Feel free to discuss who the cyclists may be in the comments below or on twitter but bear in mind that you’ll probably only be helping everyone else if you do. I’ll only consider entries with three guesses which are sent as an email. Good luck!

Update** I’ve just realised how dark the video appears when viewed on youtube, apologies for this, but I don’t think it’ll affect the ability to have a guess too much…