Nowadays of course, things are completely different and no rider could possibly consider winning the Tour without the help of his team-mates. The faithful domestiques selflessly shepherd their leader around France with little or no potential for personal glory. Although they are rewarded financially if their leader succeeds, as any winnings tend to be divided amongst all team members.

As hard as it is to judge who is ‘the best cyclist in the world‘, it is surely a far trickier task to determine who is the best domestique. Although there are some who have been more successful than others at the Tour de France, and by that I mean riding for a team leader who ultimately won the Tour.

It’s an oft repeated fact that George Hincapie was the only rider to accompany Lance Armstrong for all seven of his Tour de France wins. Although each one of these successes is now being brought into question thanks in part, allegedly, to Grand Jury testimony from Hincapie himself.

Hincapie and Armstrong after the Texan's seventh and final win.

Hincapie also aided another rider to win the Tour in 2007 when he made up part of Alberto Contador’s Discovery Channel team. However, since the reintroduction of trade teams to the Tour (as opposed to national teams) in 1969, there have been many riders who have been a domestique for two different Tour winning riders.

The first rider to do so (since 1969 – the same applies to all subsequent stats), was José Catieau. He was a French rider who helped Luis Ocana to victory on the French Bic team in 1973 and repeated the achievement with Bernard Thevenet in 1975 as part of the Peugeot squad. Catieau also enjoyed his own day of celebration in 1973 as he won Stage 1b of the Tour that year.

Throughout the following years, due to Cyrille Guimard’s series of Tour winners, there are plenty of examples of riders who guided two separate leaders toward Tour victory. Guimard’s teams managed to achieve Tour wins for Lucien van Impe, Laurent Fignon and Bernard Hinault.

Unheralded riders such as André Chalmel, Bernard Becaas, Pascal Poisson, Lucien Didier and Charly Berard can all lay claim to having helped two of Guimard’s riders win the Tour.

Having already been a part of an Armstrong and a Contador Tour winning team, this year George Hincapie has a chance to ride for, potentially, a third Tour winner, Cadel Evans. The Australian has twice finished runner-up in the race and with Hincapie by his side he is in the company of the rider with the most Tour ‘assists’. 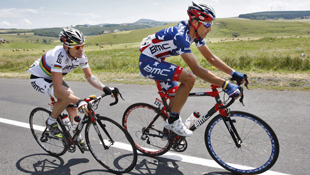 Hincapie has been a part of eight Tour winning teams and is aiming for a ninth. The next best rider is Lucien Didier with six, having helped Hinault win four and Fignon win two.

One other rider was also in with a shout this year of helping their third different leader to Tour success. Like Hincapie, having also aided Contador and Armstrong, Yaroslav Popovych was hoping to complete the hat-trick with any one of RadioShack’s four team leaders. But bad luck has put paid to any chance the team had of taking overall victory. Popovych himself has also had to abandon the race.

So Hincapie is on his own this year in trying to aim for this unusual treble. But should Evans eventually win this year’s Tour, Hincapie will not be on his own as a rider who has helped three different men to victory, as there is currently one rider who can lay claim to this feat…Dominique Arnaud.

Arnaud (not to be confused with Dominique Arnould who won Stage One of the 1992 Tour) started his career at the Spanish Reynolds team which would eventually become Banesto, Illes-Balears, Caisse d’Epargne and its current guise, Movistar. At Reynolds, Arnaud was the only French rider on the team.

He soon moved on to the more familiar surroundings at the French Wolber team of Bernard Thevenet. This was in 1981 however, so Thevenet had already won his two Tours de France and was in the final year of his career.

In 1984, Arnaud moved to the new La Vie Claire team of Bernard Hinault. Although the 1984 Tour saw Hinault get truly rinsed by Laurent Fignon, the following year Arnaud helped Hinault to his fifth and final Tour victory.

In 1986, Arnaud came full circle and returned to Reynolds where Pedro Delgado was now the leader having won the previous year’s Vuelta a Espana. The team also contained a young rider named Miguel Indurain.

Arnaud formed part of Delgado’s Tour winning effort in 1988 and in the final year of his career in 1991, he helped Indurain to win his first of five Tours de France.

Although Arnaud ‘only’ helped three of his team-mates win the Tour de France, he rode with five altogether, Thevenet, Hinault, LeMond, Delgado and Indurain. Is this a record? Finding out is most certainly on the to-do list.

As if from nowhere…a Tour winner
Team-mates in the Tour
Make way for the youth of today!
Grand Tour Trebles
Yellow and Green – The old one-two