The 2011 Tour de France by numbers

This year’s Tour has thrown up a whole feast of stats and facts. Some records were broken and others were equalled in what was an amazing three weeks of racing.

I’ve spent the last few days putting up a large amount of these stats on twitter. But if you’re not on the twitter or you missed a few I’ve compiled all the facts that have entered my head in the last week or so, right here. There’s also a few here that I haven’t mentioned at all yet.

Througout the Tour, the site’s traffic increased quite a bit so hello to any new readers. I’m kind of overwhelmed by the tweets and emails I’ve been getting thanking me for the constant stream of cycling trivia during the Tour. It’s great to know I’m not the only nerd who appreciates and gets excited about these sporting tidbits. So, on to the stats….

Of the top five riders on G.C. this year, Cadel Evans, Andy Schleck, Frank Schleck, Thomas Voeckler and Alberto Contador, all five had previously worn the yellow jersey. The last time this happened in the Tour was 1995 when the top five were Miguel Indurain, Alex Zulle, Bjarne Riis, Laurent Jalabert and Ivan Gotti. 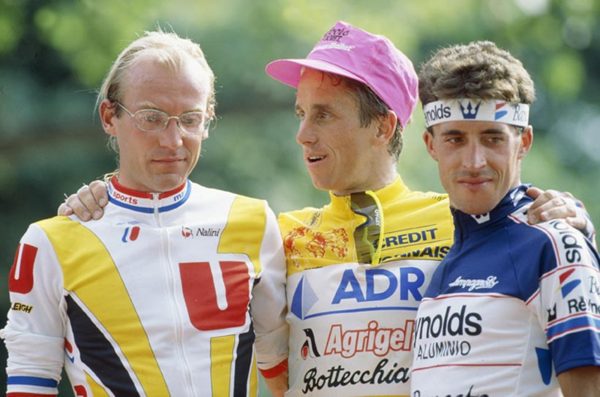 With Evans and the two Schlecks in the top three places it is certainly a formidable Tour podium. It’s the first time the Tour podium consisted of riders who have all won a classic since Eddy Merckx, Felice Gimondi and Raymond Poulidor formed the top three in 1972.

But the the Tour with the most impressive podium ever must surely be 1989. With Greg LeMond, Laurent Fignon and Pedro Delgado, it was the last occasion where the podium was filled with three previous Tour winners. It’s also the only time ever that the podium consisted of that year’s Tour winner, Giro winner and Vuelta winner.

Evans is of course the first Australian to ever win the Tour de France. He had previously worn the yellow jersey in two Tours making it third time lucky in the maillot jaune. The only rider to have worn the yellow jersey in more Tours before eventually winning is Joop Zoetemelk who won the Tour in 1980 having previously worn yellow in four separate years. 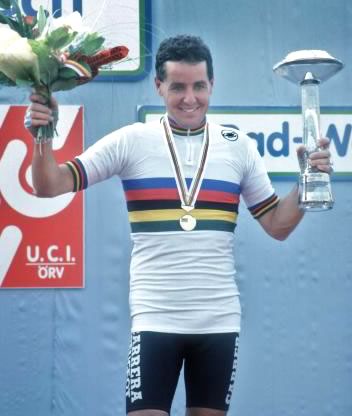 Stephen Roche. One of four 'English speakers' who have won the Tour and the Worlds.

Andy Schleck is still yet to win a stage race in his professional career. Also, by finishing second again in this year’s Tour he becomes the first rider to ever be runner-up in the Tour three years in a row. Although Raymond Poulidor, Joop Zoetemelk and Jan Ullrich managed to finish second 14 times between them, none of them ever managed three in a row.

The Schlecks took part in the Tour as part of a brand new team this year, Leopard-Trek. By not winning, the fact remains that no rider on a brand new team has ever won the Tour de France. Leopard-Trek also continue their streak of having a rider finish on the losing step of podiums, as they have also done the same in each of the four monument classics so far this year.

The Tour was also notable for the fact that each of the four jerseys went down to the wire. The competitive nature of all four classements was reflected in the number of times the jerseys changed hands. In total, there were 21 wearers of leader’s jerseys in this year’s Tour and they changed hands 26 times. The only other Tours since 1975 (the first year all four classements were present in the Tour) where the jerseys have changed hands more times was in 2008 (27) and 2006 (28).

George Hincapie has been part of a record number of Tour winning teams.

George Hincapie extends his own record having now been on nine Tour de France winning teams. During these nine Tours he has helped three different riders to Tour victory, Lance Armstrong, Alberto Contador and now Cadel Evans. Since the re-introduction of trade teams to the Tour in 1969 he is only the second rider to do this. The other is Dominique Arnaud, who aided Bernard Hinault, Pedro Delgado and Miguel Indurain.

Liquigas also extend their own remarkable record of having all nine riders finish a Grand Tour as they’ve now gone eight in a row.

Alberto Contador’s Grand Tour winning streak has finally come to an end. He had previously won each of the last six Grand Tours he had taken part in which included three Tours, two Giri and one Vuelta. The only two riders who have managed longer unbeaten streaks are Lance Armstrong (7) and Eddy Merckx (10).

Mark Cavendish won the final road stage on the Champs Elysées for the third time in a row. It’s being reported that he is the first rider ever to do so, which is true. But he was also the first rider to have done it twice in a row. Only two other riders have ever done it twice, Djamolidin Abdoujaparov and Robbie McEwen, neither of whom managed it in consecutive years.

Mark Cavendish - The most successful Champs Elysées sprinter ever.

Thor Hushovd won two stages which was the sixth year in a row that he had won a stage in the Tour de France. Only five other riders have ever achieved this, Nicolas Frantz, André Leducq, Lance Amrstrong, Miguel Indurain and André Darrigade.

Finally, Phillipe Gilbert wore the yellow jersey, the green jersey and the polka-dot jersey in the first week of the Tour. Richard Virenque is the only other rider who has ever done this. Tricky Dicky managed it way back in 1992.

Why Jens Voigt can win this year’s Tour de France
The Tour de France for stats geeks
Vuelta 2011 – The best stage race of the year?
Team-mates in the Tour
How the big contenders have prepared for the Tour