Mark Cavendish had a chance to make a bit of history this week. There have only been three riders in the history of the sport who have won a stage in all three Grand Tours in the same year, Miguel Poblet (1956), Pierino Baffi (1958) and Alessandro Petacchi (2003). Having already won two stages of this year’s Giro and five stages at the Tour, Cavendish had only a stage of the 2011 Vuelta to cross off his list to complete the hat-trick.

But, as we now know, Cavendish abandoned and in doing so forfeited his chance of joining the trio of riders who have achieved this remarkable feat. But the question is, should we really be all that surprised?

The route of the Giro d’Italia was insane. The race director Angelo Zomegnan lost the run of himself and in his quest to create as mythical and ‘epic’ a race as possible, he killed it. With so many mountaintop finishes, all the route did was enhance the truism that we already were aware of, that Alberto Contador was the best climber in the race.

Miguel Poblet - The first rider to win a stage in all three Grand Tours in the same year.

Granted, Cavendish left the Giro d’Italia before the end of the race. Choosing to depart, as did most of the sprinters, after Stage 12. But he still had to tackle three big mountain stages before abandoning.

Following this, the 2011 Tour de France was probably the most demanding of Cavendish’s career so far. He finally won the green jersey which is evidence that he was constantly on guard battling it out for points at the finish. But because of the new green jersey rules he also found himself sprinting twice a day on some occasions.

The battle for the G.C. between Evans and the Schlecks was also so intense that the gruppetto of which Cavendish was a part, missed the time cut on two consecutive Alpine stages.

Cavendish may have had his best ever Tour de France, winning five stages and the green jersey, but it was also the toughest he’s ever had to ride. 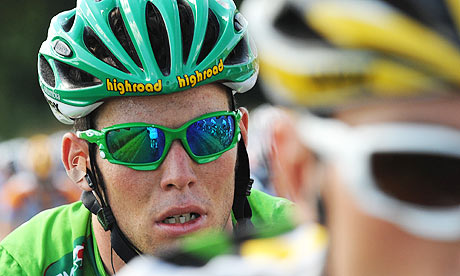 Cavendish completed his toughest ever Tour this year

Of all the riders who started the Giro, just 29 of them started the Tour, with just 17 of those completing both the Giro and the Tour. Both of these figures are about half of what they usually tend to be, which is a measure of just how tough the team managers thought tackling both Giro and Tour would be this year.

Moving on to the Vuelta then, of the 29 riders who started both the Giro and the Tour, just four decided to also take part in the Vuelta. Those four riders are Sebastian Lang, Tyler Farrar, Alessandro Petacchi and Mark Cavendish.

Sebastian Lang could complete all three Grand Tours this year.

It’s one thing to say that a rider took part in a couple of Grand Tours this year, but considering the actual number of race days completed by each rider gives a much more defined idea of how exhausted they must be.

Before Mark Cavendish abandoned the Vuelta a Espana on Stage Four, he had racked up 76 race days in 2011. Of the other 197 starters in the Vuelta, only four of them have raced more days this year than Cavendish. Those four are Nicki Sorensen, Sergey Lagutin, Tyler Farrar and surprisingly for his young age, Jakob Fuglsang.

Cavendish’s 76 race days only include UCI races of category 1 and above. They don’t include the post-Tour criteriums for which, having won the Tour’s green jersey, he would have been in great demand. These races would have taken him well over the 80 mark.

Really, it’s no wonder he is tired.

The Grand Tour hat-trick: A stage win in each
I’m the best f*****g sprinter in the world
Bring back time bonuses at the Tour!
Where have you been Alessandro?
Best Stage Winning Grand Tour Debuts