The Curse of the White Jersey

There has been much made of the supposed ‘Curse of the Rainbow Jersey’ over the years. The story goes that the rider who becomes World Champion often has a bit of a stinker throughout his year in the Rainbow Jersey.

But what of the White Jersey as the best young rider in the Tour de France? Unlike the World Champion, the winner of this prize doesn’t carry the jersey with him for the following 12 months, but he does carry with him a weight of expectation; that his performance in the Tour is the start of something good.

But quite often, for the best young rider in the Tour de France, this has not turned out to be the case. 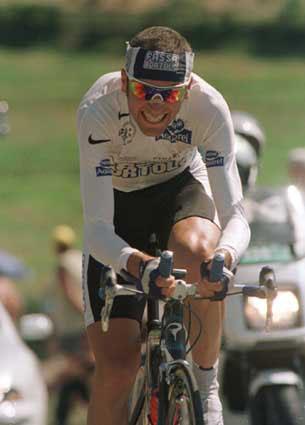 Ivan Basso - One of the few riders who have won the white jersey and improved the following year. (via cyclingnews.com)

Every other winner of the white jersey failed to improve on their breakthrough performance the following year. (Although a further exception is Laurent Fignon, who won both yellow and white in 1983 and then won yellow again the following year, so technically didn’t finish higher the next year, because he couldn’t!)

The biggest difference over the two years from success to failure was suffered by the little-known French rider Benoit Salmon in 1999. He won the white jersey by finishing a relatively low 16th and followed that up in 2000 by ending up in 107th.

Damiano Cunego, winner of the Giro d’Italia in 2004, won the white jersey at the Tour in 2006. A result which marked the beginning of five years of Grand Tour obscurity for the Italian.

But there aren’t just examples of bad performances lending itself to the notion of a curse on the white jersey. Consider the winner in 2007, Alberto Contador. Of course he won the whole Tour that year too, but the following year having signed for Astana, a team born from the remnants of the notorious Liberty Seguros-Wurth team, the Spaniard and his team were not invited to take part in the 2008 Tour. 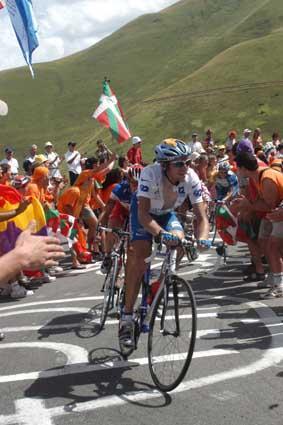 Denis Menchov - Winner in 2003, crashed and abandoned the following year, because he loves crashing. (via cyclingnews.com)

Although Jan Ullrich won the jersey three times, having won it for the final time in 1998, he missed the next year’s Tour altogether due to a knee injury sustained in his home Tour of Germany.

The final time Marco Pantani won the white jersey was in 1995. Just a few months later, during the now defunct Milano-Torino race, Pantani collided with a jeep and suffered compound fractures to his left leg. Needless to say he was not at the startline of the Tour in 1996.

The white jersey winner in 1993 was Antonio Martín who was also involved in a road accident, this time while training in early 1994. Martín was killed in the accident, aged just 23.

It could of course be argued that if any position in the Tour was chosen, several appropriate tales of woe could be discovered. For instance, if we were to take say, the riders who finished fourth in the points classification every year, there would probably be enough of those riders who had a stink the following year to warrant the ‘curse of coming fourth in the points classification’.

The underlying point here, is that success in the white jersey one year does not automatically equate to immediate success the next. And the underlying point behind that is that Pierre Rolland shouldn’t be getting carried away with himself.

Rolland has already stated that:

“I won a stage, took a jersey. The next step is to win the Tour“.

However in the same interview he says:

“There is pressure from the media but I know how it works. I’m a rider before anything else. I’ve got a career plan and I just want to follow it.”

He is the first French rider to win the white jersey in 12 years so there will be undoubted media pressure on him. This pressure is one of the main reasons attributed to the ‘curse’ bestowed upon the rainbow jersey wearer, as well as extra sponsor commitments.

However, with Jean-Rene Bernaudeau as his directeur sportif at Europcar, Rolland is in good hands. Bernaudeau is one of those riders who won the white jersey in the past and never quite lived up to the ensuing expectation.

There is most certainly a type of curse that will befall Rolland in next year’s Tour, that is the curse of being a marked man. The peloton now knows what the young Frenchman is capable of. He will no longer be let go when he attacks on the slopes of a climb such as Alpe d’Huez. He has forfeited that advanatge with his performance this year. Next year, he will be earning his high G.C. placing ‘the hard way’.

Rolland would be better served targetting more modest goals for a year or two, rather than talking about the yellow jersey straight away. Why not try to win Paris-Nice next year? Or even the Vuelta? There is so much emphasis now on young promising riders targetting the Tour de France, they’re ignoring their stage racing apprenticeships which prove to be so important. An ignorance which has hampered Andy Schleck’s attempts to win the Tour de France in the past three years.

Rolland, like Schleck, has never won a stage race. Time should be taken to learn how to lead and how to win week-long races before he goes chasing the biggest victory of all.

Beware the wounded Schleck
Nicolas Roche’s learning curve
Vuelta 2011 – The best stage race of the year?
Team-mates in the Tour
How the big contenders have prepared for the Tour