Beppu was not one of the riders announced in the press release who will be making the move from RadioShack to the new hybrid team.

Another rider left to sort out his future is Philip Deignan, who had this to say in an interview with cyclingnews.com, who I hope will forgive me for the extensive quote:

We’re all pretty shocked about it… It wasn’t something that we were expecting. We know that it was strange that there were no signings in August… So we were expecting changes but I don’t think anyone was expecting the team to stop. We’re shocked and disappointed that the management have left it this late to tell everyone about it.

We haven’t heard from them and we’ve not had any explanation. We’re all pretty disappointed. We had no explanation but the obvious reason seems down to money. But the riders are in the dark the whole time, we’re the last ones to know about these things.

I’ve had a really bad season. I had an injury and viral infection all season…We’re all just trying to cope as best we can. We’re all trying to stay focused but it’s difficult. A lot of the staff here have families and mortgages and there’s over 50 people involved.

What is the most depressing thing about these quotes from Deignan is that these comments weren’t made in the wake of the Leopard-Trek/RadioShack merger. These comments were made almost exactly a year ago when it was announced that Deignan’s Cervelo Test Team would cease to be and would eventually ‘merge’ with Garmin-Transitions to form the ‘superteam’ Garmin-Cervelo. Deignan was not made a part of that merger and was left to find a team for himself and ended up at RadioShack for the year.

Yes, this is the second year in a row that Deignan has had to deal with the same shit. But this year could be far worse for the man from Donegal.

Teams need riders with UCI points in order to ensure that the accumulation of their rider’s points places the team in the top 17 in the world on the points scale. This is to ensure that the team qualifies for a ProTeam license. Riders keep their points with them for the results of the previous two years, so it’s not just this year’s results that are taken into account when determining next year’s Pro Teams, the results from the previous year are also still attributed to the riders in the form of these precious UCI points.

This time last year, Deignan could still rely on his results from the 2009 Vuelta (a stage win and ninth overall) in order to sell himself as an attractive rider (with plenty of UCI points) to potential suitors.

But another year has passed, and now Deignan is forced to deal with the same situation but without the comfort of those UCI points. 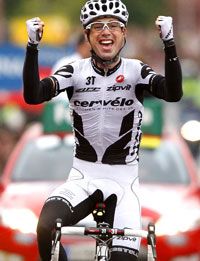 Deignan winning a stage in the 2009 Vuelta

His comments in the cyclingnews article that he “had a really bad season. I had an injury and viral infection all season” also pretty much apply to this year. The past two years have been torrid for Deignan with no real results of note. He currently has no UCI points.

So although Deignan has proven he can perform in a Grand Tour, perform domestique duties and is an excellent rider to have in a team, the way the UCI system works means that on paper, Deignan is now essentially worthless.

The Leopard-Trek and RadioShack press releases announcing this upcoming merger contain phrases such as:

a further milestone in the development of this exciting young project

the bright future of our athletes

a great milestone for our team and our global sport

will dominate cycling for years to come

I’m sure all the riders and staff that have been left without jobs find this spoon-fed PR shite as nauseating as the rest of us.

This is not a merger. It is a cull. And the fact that it is being dressed up as a triumph for cycling is insulting to cycling fans. But most of all, it is insulting to all the riders who will now struggle to earn a living next year in the sport that they love because of the gross mismanagement of that sport.

The Changing Face of Cycling
Dan Martin – Is he the first Irish rider to….?
Utrecht, Dublin, Poland and La Vuelta
The Irish Renaissance
A New Irish Trio