The Spaniard ended up winning the race because of time bonuses. He accumulated 32 seconds more in time bonuses throughout the race than Froome. Thus, the Team Sky rider actually rode the race route 19 seconds faster than Cobo.

But did he really?

If you look at the finishing positions of both riders on every stage, there are plenty of stages where they both crossed the line as part of the peloton, who of course are all attributed the same finishing time (unless you finish in the top three and are awarded a time bonus). However, there are more stages where Cobo finished in the peloton ahead of Froome than vice versa. 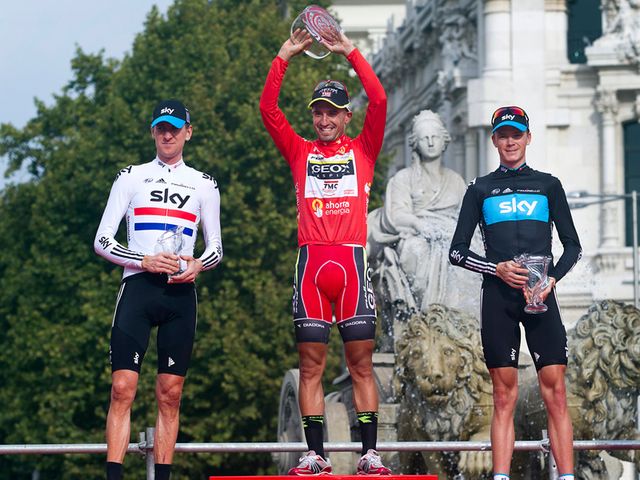 Cobo beat Froome of Team Sky thanks to time bonuses.

So with a forensic analysis of the race footage to see what the actual time gaps were between the two riders on each stage, it could be argued that Cobo made up those 19 seconds by consistently finishing a few seconds ahead of Froome in the bunch and therefore actually did ride the route faster than anyone.

Of course this point is moot and borderline nonsensical, but it just goes to highlight that Froome wasn’t bothered about these time gaps because of the timing system used in the Vuelta a Espana. He knew he didn’t have to be bothered. He knew he would be tagged with the same time as long as there were no one-second gaps between any two consecutive riders finishing between himself and Cobo. Just as he knew that that same timing system would award a time bonus to the first three finishers over the line at the end of the stage.

Cobo had team-mates like Denis Menchov who were hoovering up bonus points so that Froome couldn’t, while Team Sky were busy weighing down Froome with a Bradley Wiggins-shaped anchor.

This is also not the first time that a rider has won a Grand Tour due to time bonuses.

In 1983 the World Champion Giuseppe Saronni won the Giro d’Italia where he finished 67 seconds ahead of runner up Roberto Visentini. But on a relatively flat Giro route, Saronni dominated the points jersey competition and amassed a massive tally of time bonuses. Saronni won the 1983 Giro thanks to time bonuses

Bonuses of 30, 20 and 10 seconds were awarded to the first three riders across the line on every stage. Saronni racked up three stage wins, two second places and three third places throughout the three weeks of racing, which took a total of 2’40” off his actual time. Visentini on the other hand only managed to gain one minute in time bonuses.

Consequently, had time bonuses not been awarded to the riders, Visentini would have won the 1983 Giro d’Italia by 33 seconds. But Saronni used his ability to sprint to ensure victory in Italy’s biggest race while in the Rainbow Jersey, the last rider to achieve this distinction.

The rule which states that all riders in the same group be attributed the same time is there for a reason, safety. It’s to prevent the mayhem which a bunch of 180 riders all clamouring for a position at the front of the peloton would create.

The rule which awards time bonuses at the end of stages is also there for a reason, excitement.

It ensures that sprinters can aim for the leader’s jersey of the race in the opening week. It adds a layer of uncertainty at the stage’s end as to who might be in the race lead. And, as with the two cases mentioned here, it can ultimately decide the race.

Currently, the Tour de France does not include time bonuses. Race organiser Christian Prud’homme has said this is to get back to basics and to award the Maillot Jaune to the rider who actually does complete the circuit in the fastest time (even though, as mentioned, the current Tour timing rules may inhibit this from being the case anyway).

Wilfired Nelissen would never have worn the Tour's Yellow Jersey if it wasn't for time bonuses.

If there had been no time bonuses in the 1993 Tour de France, having won the Prologue time trial, Miguel Indurain would have been in yellow for the entire race. Instead we saw the jersey swap shoulders five times between Mario Cipollini, Wilfred Nelissen and Johan Museeuw. It would have been a similar tale of monotony in the 1999 and 2002 Tours.

Having time bonuses in the Vuelta a Espana last year made the race all the more interesting, contributing to the fact that a total of nine riders wore the leader’s red jersey. It’s been said before, and it’ll be said again…bring back time bonuses at the Tour!