The Irish exodus to Australia continues

When the Great Famine gripped Ireland in the early part of the 19th century the number of emigrants who left Irish shores numbered in their millions. Most of those who fled ended up in America, but 50,000 or so ended up even further afield, in Australia.

So began a 200 year old connection between the two countries. A connection which has been strengthened recently, again for all the wrong reasons, by many more thousands of Irish fleeing their homes, this time in search of work. The big R has hit Ireland harder than most and the construction industry has ground to a halt. This has led to many tradesmen downing tools and applying for Australian visas in the past few years.

This week there will be another Irishman to add to the list of those making the trip around the world to ply their trade in Australia: Matt Brammeier.

Having been part of the HTC-High Road setup which folded last year, the Irish road race and time trial champion will be making his race debut for his new team, Omega Pharma-Quick Step.

He will most likely be playing a support role for either of the team’s two sprinters Gerald Ciolek or Gert Steegmans, both of whom have struggled to have the desired impact in recent years.

But Brammeier is not the first Irish cyclist to take part in the Tour Down Under. Nicolas Roche made his debut there for his current AG2R team in 2009 where he finished a decent 14th overall. He said afterward:

“It’s not bad for a first race, especially a ProTour event. Unfortunately it doesn’t get me any ProTour points though.”

(Showing a fixation on points which will be the topic of a whole other post). 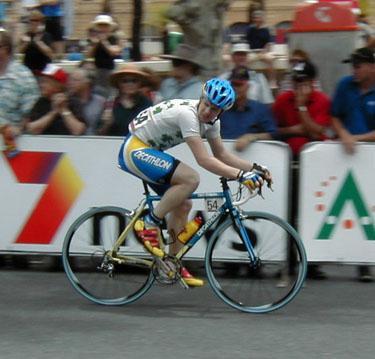 Mark Scanlon rode the Tour Down Under as Irish national champion in 2003 (via cyclingnews.com)

Brammeier will also not be the first Irish rider to show off the national champion’s jersey Down Under. That honour befell former Junior World Champion Mark Scanlon. The Sligoman won the Irish jersey in Meath in the summer of 2002 and then rode the Tour Down Under the following year, also as part of the AG2R team and, like Roche, also in his first ever race for the team. He finished 19th overall and managed eighth on Stage 4 into Goolwa, the highest stage placing ever achieved by an Irish rider in this race.

The Irish champion’s jersey made one further appearance at the Tour Down Under in 2005 when David O’Loughlin, fresh from his first of three national road race wins, took part in the Tour Down Under as part of the Navigators Insurance Cycling Team, an American setup. O’Loughlin ended the race in 21st place, the best placed rider on his team and just over five minutes behind eventual overall winner Luis Leon Sanchez.

David O'Loughlin rode the Tour Down Under as Irish road race champion in 2005.

One of O’Loughlin’s team-mates that year on the Navigators Insurance team was Waterford man Ciaran Power who actually finished second to Scanlon in the national road race in Stamullen in 2002.

Consequently, Brammeier will be the fifth Irishman to fly the flag in the Tour Down Under.

There is a further, tenuously linked Irish interest to be had on Brammeier’s team as Andrew Fenn will make his World Tour debut in South Australia next Tuesday. Fenn is English but he rode last year as part of the An Post-Sean Kelly Team. He is a former winner of the Junior Paris-Roubaix and has also finished fifth and 10th in the Espoirs edition of the famous race. His biggest result to date is a bronze medal at the Under-23 World Championships last September. Andrew Fenn is definitely one to watch for the future.

With Brammeier likely to be on domestique duty we probably won’t see an end to the Irish famine of stage wins in the Tour Down Under but it should make for interesting viewing nonetheless.