The most underwhelming Grand Tour winner

Over the years there have been some incredible exploits in Grand Tours where one rider has dominated the entire race. The most overwhelming of these was probably the Tour de France debut of the greatest cyclist ever, Eddy Merckx.

In 1969, the great Belgian finished the race in the yellow jersey while also winning the green points jersey and the mountains prize. In addition, he won the combination jersey and his Faema team won the teams classification. In those days, there was no prize for the best young rider, but aged just 24, Merckx would have won that too. He won six stages that year, three time trials and three mountain stages and finished almost 18 minutes ahead of anyone else – total domination.

Freddy Maertens - Won 13 stages of the 1977 Vuelta, a record for any Grand Tour

Other famous total victories in Grand Tours are Freddy Maertens’ win in the 1977 Vuelta a Espana where he amassed a tally of 13 stage wins. There’s also the 1929 Giro d’Italia where Alfredo Binda won eight stages in a row on his way to overall victory. A win that was so dominant that he was paid not to compete the following year.

While there are many stories surrounding these and other famous victories, there are many less heralded Grand Tour champions who nevertheless remain on the roll of honour in the history books.

It is unfair to suggest that any Grand Tour winner is undeserving of victory, after all, every ride in the race faces the same route, but there have been some riders who achieved victory in a thoroughly underwhelming fashion.

Oxymoronically, the most famous underwhelming victory in a Grand Tour was probably the 1956 Tour de France won by Roger Walkowiak. In much the same way that Oscar Perieiro won the 2006 Tour, the Frenchman of Polish origin got into a breakaway in an early stage which finished a massive 18 minutes ahead of the peloton. Walkowiak lost the yellow jersey a few stages later but regained it again before Paris using his 18 minute buffer to full advantage. Roger Walkowiak surprised everyone by winning the 1956 Tour de France

Walkowiak did not win a stage of the 1956 Tour de France. Furthermore, he didn’t even finish in the top three on any stage that year. Although he is remembered as an underwhelming and surprise winner of the Tour, the race itself was considered extremely exciting. A race report at the time reveals the following:

Whereas most of the post-war Tours have been on the lines of scientific boxing contests and often of little interest to the general public, the 1956 version was more like a good old free-for-all, with action from the word go.

By this reckoning, Walkowiak is a fighter rather than a calculator, and his surprising victory may well mark the revival of other fighters who for years have been battling away with no spectacular success in all corners of the continent.

Also on Walkowiak’s palmarés are two stages of the Vuelta a Espana, one each in 1956 and 1957. Consequently, there are two candidates for the title of most underwhelming Grand Tour winner ever who were even more underwhelming than Walkowiak.

Marco Giovannetti was a rare Italian winner of the Vuelta a Espana in 1990. He finished the race in the gold leader’s jersey almost one and a half minutes ahead of runner-up Pedro Delgado. But, like Walkowiak in the 1956 Tour, he did so without winning a stage. And also like Walkowiak, Giovannetti won his Grand Tour without finishing in the top three of any stage. 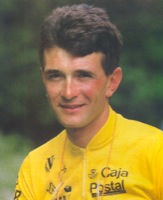 Marco Giovannetti - won the 1990 Vuelta without winning a stage

However, unlike Walkowiak, Giovannetti never won a stage of any Grand Tour throughout his whole career. However, he did finish on the podium of the Giro d’Italia in 1990. And he’s also one of an elite group to have ridden and finished all three Grand Tours in the same year, a feat he managed in 1991.

These additional achievements by Giovannetti set him apart from the one other outstanding candidate for the most underwhelming Grand Tour winner ever – Angel Casero.

The Spaniard won his home Grand Tour in 2001 beating Oscar Sevilla and Levi Leipheimer into second and third place respectively.

And like our other underwhelming champions, he won it without finishing in the top three of any stage.

However, there is a further detail which adds to the insipidity of Casero’s victory. Having only taken the race lead after overhauling Sevilla in the final stage time trial, he didn’t wear the leader’s jersey for the entire race. He has also never won a stage of either of the other Grand Tours.

Having won the 2001 Vuelta a Espana, Angel Casero, perhaps the most underwhelming Grand Tour winner of all time, never won another race.