The 2012 Giro d’Italia isn’t a week old yet and Mark Cavendish has, perhaps unsurprisingly, already won two stages. But his first Grand Tour stage wins of the year are even more distinguished than usual, because he has taken these victories while clad in the rainbow jersey of world champion. The last rider to do so before Cavendish was Cadel Evans as recently as 2010 in that famous mud-strewn stage over the white roads of Tuscany to Montalcino. Evans crossed the line caked in pale brown slime, but had his wits about him enough to wipe his rainbow jersey slightly before puffing a big sigh of relief as he crossed the line.

The last rider to win multiple stages of the Giro as world champion, as Cavendish has now done, was Mario Cipollini in 2003. It was also the year where he famously equalled and broke Alfredo Binda’s record of 41 stage wins in the Giro d’Italia. It was the 13th year that Cipo had started the Giro, and it was the 13th time that he had won at least one stage, but his record-breaking 42nd win was to be his last.

Regardless of whether he completes the three week race this year, Cavendish is likely to win more stages, but he will find it near impossible to break the record of the most Giro stage wins as world champion. This record is shared between two riders and stands at a massive seven stage wins. 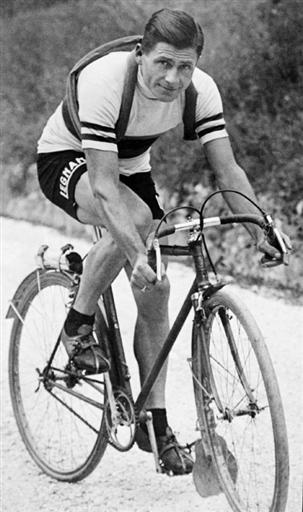 The most recent rider to have won seven Giro stages while in the rainbow jersey is the Belgian Freddy Maertens who did so in 1977. Even more remarkably he did so within the first eight days of racing (which included a couple of split stages). He abandoned during Stage 10.

The other rider to have achieved this feat went one better. In 1928, having become the first ever road world champion in Germany the previous year, Alfredo Binda won seven stages of the Giro and won the race overall. Binda is one of three riders along with Eddy Merckx (1968, 1972) and Giuseppe Saronni (1983) who has won the Giro d’Italia as world champion. Binda, like Merckx, also did so twice, achieveing this rare feat for the second time when he won the Giro for the fifth and final time in 1933.

The following is a breakdown of the world champions who have won stages of the Giro d’Italia: