Stage Three of this year’s Giro d’Italia ended in a massive crash caused by Roberto Ferrari. The two highest profile victims of the crash were the leader of the points competition Mark Cavendish and the leader of the entire race, Taylor Phinney.

The young American looked to have seriously hurt his ankle in the fall and actually didn’t cross the line with his bike to finish the stage. But he did climb out of an ambulance at the stage finish to collect his third Maglia Rosa of this year’s race. It remains to be seen whether Phinney will recover sufficiently to take part in the Stage Four team time trial. The rest day tomorrow will be of great benefit to him, but on viewing the pictures from the finish line, it does not look good.

Should Phinney be forced to abandon the race as a result of his injuries, the pink jersey would pass to the second placed rider on G.C., Geraint Thomas. It is not the way Thomas would ideally like to wear his first Grand Tour leader’s jersey but it seems the most likely outcome.

Phinney after his crash in Stage Three of this year's Giro

A similar series of events took place in the 2005 Tour de France when race leader David Zabriskie crashed during a team time trial and was forced to abandon. Lance Armstrong was the Geraint Thomas this time, sitting as he did in second place overall. In one of his more noble gestures, the Texan offered not to wear the yellow jersey the following day, but the race organisers insisted.

Regardless, of the decision of the race organisers this time around, because the first three days have all taken place in Denmark, Phinney is facing the unlikely scenario that he will have worn the leader’s jersey during the Tour of Italy but will have never actually gotten to wear it in Italy. So, attention all cycling nerds, has this ever happened before?

This year is the tenth occasion where the Giro has kicked off outside of Italy, the previous nine provide the most likely setting for this oddity to have ever occurred before.

1965 – San Marino
The first stage began in the tiny principality of San Marino and ended in Perugia. The winner was Michele Dancelli, but by the time he was awarded the Maglia Rosa, the ace had already reached Italy…nothing to see here.

Michele Dancelli - Winner of the first stage of the 1965 Giro

1966 – Monaco
A similar story to the previous year. Monaco being too small to host a road stage of any significant distance, Stage One in 1966 finished in Diano Marina. This time the honours fell to Vito Taccone, but again he received the jersey once the race was back in Italy…moving on.

1973 – Belgium
The 1973 edition didn’t just begin in Belgium, in a remarkably international first week, over the first five stages the Giro visited Belgium, Germany, Luxembourg, France and Switzerland before finally crossing into Italy at the end of the fifth day of racing. But Eddy Merckx led the race from start to finish, so again, there was to be unfortunate Rider in Pink who was denied the chance to parade the jersey in Italy

1974 – Vatican City
Again, the stage finished in Italy, this time in Formia where the pink jersey was adorned by the Belgian Wilfried Reybrouck.

1996 – Athens
The first three stages of the 1996 Giro all took place in Greece. Silvio Martinello won the opening stage and held the pink jersey before losing it to Stefano Zanini as the race travelled back into Italy for Stage Four. But Martinello is not the rider we’re looking for, as he regained the jersey from Zanini the following day.

2002 – Holland
The only other Giro that comes close to rivalling the 1973 edition for its international flavour. Starting with a prologue, the race included stage finishes in Germany, Belgium, Luxembourg and France before returning to Italy for Stage Five. It is here where we find our winner. 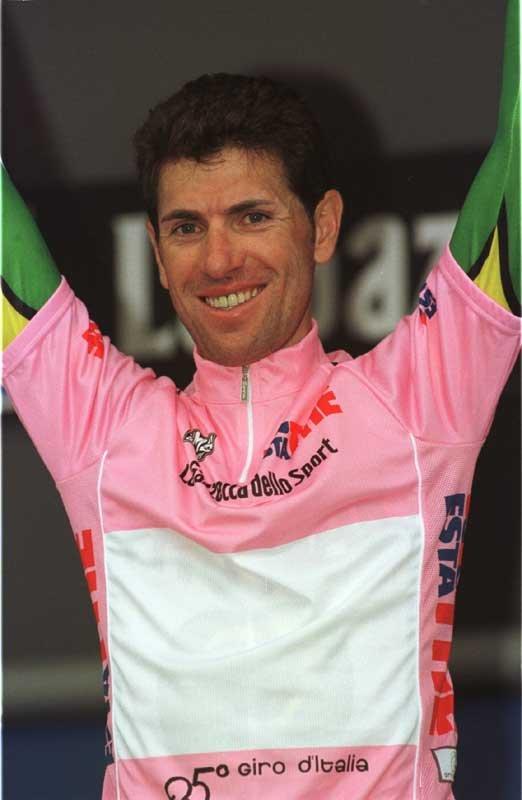 Juan Carlos Dominguez - Led the Giro in Holland, but not in Italy

The prologue was won by the little known Spaniard Juan Carlos Dominguez. He lost the jersey the following day and never wore it again in his career. Dominguez became the first Giro leader never to lead the Giro in Italy.

Two other riders also wore Pink that year before the race returned to Italian soil. Stefano Garzelli and Mario Cipollini. But Garzelli wore the jersey in Italy during two other years, 2000 and 2003, winning the millennium edition of the race. Cipollini has worn the Maglia Rosa in five separate Giri, the most editions of any rider who has never won the race.

2006 – Belgium
The first four days of the 2006 Giro were all raced in Belgium and the race leader for the entire sojourn was the defending champion Paolo Savoldelli. ‘The Falcon’ did lose the jersey before the return to Italy but he had worn the Maglia Rosa previously on home soil in both 2002 and 2005, winning the race on both occasions.

2010 – Holland
Here we found ourselves another unfortunate. The first three stages of the 2010 edition all took place in Holland. The prologue was won by Bradley Wiggins who promptly lost the lead the following day to Evans before the jersey returned to Italy on the shoulders of Alexandre Vinokourov. Evans had worn the jersey before, when he famously capitulated in 2002. But Wiggins has not worn the jersey before or since.

Consequently Juan Carlos Dominguez, Bradley Wiggins and Taylor Phinney are currently the only three riders who have ever led the Giro but who have never led it in Italy.

For the sake of completeness, there have of course been stages throughout the Giro which have been entirely self-contained in countries other than Italy (i.e. not necessarily at the very start of the race). This has happened on a surprisingly few five occasions.

The first was in 1958 when Stage 14 consisted of a time trial held in San Marino. Agostino Coletto lost the jersey in the test against the clock but he had worn it for the previous two stages in Italy.

The other four occasions took place in either Switzerland or Austria in the years 1989, 1990, 1994 and 1998. On each occasion, the leader coming into the stage was also the leader after the stage end which meant each of them certainly had the opportunity to wear the Maglia Rosa in Italy. Respectively, these riders were Laurent Fignon, Gianni Bugno, Evgeni Berzin and Marco Pantani and each of these riders would go on to win the Giro overall that year.

Of course, we all hope that Phinney will be declared fit to continue so he can wear the Maglia Rosa in his adopted home country of Italy. But if he doesn’t, he will join the bizarre list of riders, alongside Dominguez and Wiggins who led the Giro but never in Italy.

Why Jens Voigt can win this year’s Tour de France
Giro stage wins in the Rainbow Jersey
Froome, Cobo, Time Bonuses and the Tour de France
Vuelta 2011 – The best stage race of the year?
How the big contenders have prepared for the Tour