Riders who are capable of winning multiple Grand Tours are clearly among the pantheon of cycling greats and some of the best cyclists the sport has ever seen. But within each Grand Tour lies the opportunity for riders to win a stage.

Joaquim Rodriguez is the most recent rider to join the club.

As such, there are plenty of riders who fall into the category of riders who have won stages of all three Grand Tours in their career. In fact, there are 82 of them. Joaquim Rodriguez was the latest to join the club after he won Stage 17 of this year’s Giro.

So who was the first the manage this achievement?

The first year that this feat became possible was in 1935 when the Vuelta joined both the Giro and the Tour on the cycling calendar. Although the Tour de France was much more of an international affair, in early years both the Giro and the Vuelta very much remained races for Italian and Spanish riders respectively. Thus, in the 1930s and 1940s it was rare for riders to even ride two different Grand Tours in their careers, not to mention three. Of course, the interruption of war along with the problems of travel in the aftermath of war did not help matters throughout this period.

It wasn’t until the mid 1950’s that the hat-trick was finally achieved and there followed a flurry of completed Grand Tour stage winning hat-tricks in the proceeding years.

The honour of being the first rider to win a stage in each of cycling’s Grand Tours goes to the Italian, Fiorenzo Magni. He had already won stages in three separate editions of the Giro d’Italia (winning two overall) and won stages in five separate editions of the Tour. He probably would have won the Tour in 1950 had he not been forced to abandon due to Gino Bartali’s gripe with the French crowd.

Fiorenzo Magni was the first man on the list.

But Magni was still missing a stage win in the Vuelta, a race he had not even entered before 1955. But in a 29km time trial around Barcelona that year, Magni beat Mario Baroni by a single second to seal the hat-trick and be the first of the 82 riders to do so. Magni went on to win another stage of the Vuelta that year and followed that up with his third and final victory in the Giro d’Italia.

During Magni’s final Giro win later on in 1955, the second Grand Tour stage winning treble was completed by Bernardo Ruiz, just 22 days after Magni had completed the first. The floodgates had opened and more and more riders began to actually compete in all three races throughout their careers. The following year in 1956, the feat was achieved four times, by Rik van Steenbergen, Miguel Poblet, Hugo Koblet and Nino Defilippis, the first three of which all rounded off the treble at the same race, the 1956 Vuelta.

In 1956, after Poblet’s three stage wins in the Vuelta, he went on to win four stages of the Giro and then won Stage 8 of the Tour into La Rochelle to become the first rider to win a stage of all three Grand Tours in the same year. Amazingly, the next rider to complete the hat-trick, also did so in the same year, that was Pierino Baffi in 1958. The only rider since to have emulated the feat of Poblet and Baffi is Alessandro Petacchi who repeated the trick in 2003.

Also worth mentioning, is that Baffi’s son Adriano almost emulated his father in taking a career hat-trick. Baffi junior rode for prominent teams such as US Postal and Mapei-QuickStep before retiring in 2002. He won five stages of the Giro throughout those years as well as one stage of the Vuelta in 1995. He narrowly missed out on all three when he was pipped to the line by Johan Museeuw on the final stage of the 1990 Tour de France on the Champs Elysées.

There is one Irish cyclist on the list but perhaps surprisingly it is neither Sean Kelly or Stephen Roche. Kelly won many stages of both the Vuelta and the Tour but only rode the Giro once, towards the end of his career in 1992. Kelly did not feature prominently in the race at all before abandoning after Stage 15.

Seamus Elliott - The only Irishman who bagged the hat-trick

It is a similar story for Stephen Roche, who having won stages of both the Giro and the Tour, only rode the Vuelta once, again towards the end of his career and again in 1992. The best Roche could manage was sixth place on a couple of stages on his way to a 14th place overall.

The only Irish rider to have won a stage of all three Grand Tours is Seamus Elliott. The first Irish cyclist to make it on the European scene had won a stage of the Giro in 1960 and two stages of the Vuelta, one each in 1962 and 1963. He sealed his own hat-trick on the cobbled roads of Roubaix in the Tour de France of 1963.

With over 80 riders having achieved this feat, it is to be expected that there are a couple of riders who have done it only to be retroactively stripped of victories. The number would stand at 84 if it were not for Alberto Contador losing his stage wins in the 2011 Giro (he won the 2008 Giro without winning a stage), and Leonardo Piepoli who was stripped of his only Tour de France stage win in 2008.

There are of course all the names you would expect amongst the 82 riders: Merckx, Hinault, Anquetil, Van Looy, Van Impe, Jalabert, Ullrich, Cavendish, Cipollini, Gilbert are all present on the list. But there are a host of lesser known riders who are eprhaps less familiar: Sergei Utchakov, Ercole Gualazzini, Ward Sels, Guido Carlesi and Vicente Lopez Carril. 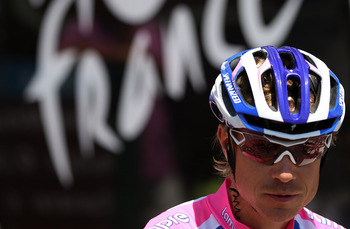 Damiano Cunego - The most likely rider to join the list in July?

This year’s Tour de France is fast approaching and therein provides 21 opportunities for a number of riders to complete the hat-trick. There are seven active riders who have won a stage of both the Giro and the Vuelta but are still waiting for the big one in the Tour de France. Two of these riders, although still active, ride for teams who will not be present at the Tour: Danilo Di Luca and Robert Forster.

This leaves five riders who, if selected for the Tour, have a chance of joining the existing 82 rider list: Francisco Ventoso, Igor Anton, Mikel Nieve, Leonardo Bertagnolli and Damiano Cunego.

A special mention must also go to Wouter Weylandt, who having won a stage of the Giro and the Vuelta was robbed of his chance of completing the hat-trick when he was tragically killed on the third stage of the 2011 Giro aged just 26.