Walkowiak would later lose the race lead but he fought tenaciously in the mountains and regained the Maillot Jaune with four days to go until the Tour reached Paris. The Frenchman held on for the win and became only the second rider since Firmin Lambot in 1922 to win the Tour without winning a stage. In fact, Walkowiak remains the only Tour winner who never even managed to finish in the top three on any stage.

In the aftermath of the Tour, Walkowiak was labelled as a lucky winner who won the Tour the easy way, by stealing minutes in an innocuous looking breakaway, rather than by attacking and taking minutes in direct combat with the main G.C. favourites.

In 2006, on Stage 13 of the Tour de France, a group of five riders broke clear of the rest of the peloton on the road to Montélimar and finished almost half an hour clear. Again, the best placed rider took over the race lead, this time the man in the right place at the right time was Oscar Pereiro. And again, Pereiro would lose the race lead only to gain it back four days before Paris.

On this occasion however, Pereiro lost the race lead once more as Floyd Landis stole the Maillot Jaune in the final time trial. Of course, Landis was subsequently stripped of the victory and Pereiro inherited the win. When we look back on the Tour of 2006, we mostly remember the Landis disqualification and Pereiro’s ‘default victory’. But if Landis hadn’t performed his remarkable drug-fuelled comeback to Morzine, we may be looking back at Pereiro’s win as a ‘lucky’ one regardless, just as was the case with Walkowiak.

The point is, strange things can happen in the Tour de France and this year it could happen again.

Every day in the Tour, after much attacking and chasing, a breakaway is allowed clear of the bunch which gives a shape to the days racing. On most days the breakaway is caught, but sometimes, on those rare days where the circumstances are just right, it makes it to the finish. But with race radios and constant communication between riders, any dangerous riders are never allowed to gain too much time in opportunistic breakaways.

But this year could be different. For the past few editions of the Tour de France, Mark Cavendish has had a team built around him. On the flat days where Cavendish fancied his chances, the Columbia-HTC team totally controlled the gap afforded the break each day and took full responsibility for reeling them in to set up Cavendish for his inevitable bunch sprint victory. Teams with other sprinters would contribute occasionally but in general it was left up to Cavendish’s team to perform the grunt work.

For the first time since 2008, Cavendish’s team is not going to police the peloton and control the breakaways on every single flat stage. Michael Rogers, Cavendish’s current team-mate at Team Sky, said this to Cycle Sport magazine about controlling the bunch at this year’s Tour:

If you’re chasing stages like that, you’re going to use up your men: men who could become handy for Brad in the last 10 days. So, I think we have to be selective about what stages Mark can win. In my opinion, you have to go with what’s on paper, and be prepared to say: “These are the days we can do it”.

Another team with the capability of winning bunch sprints is Garmin-Barracuda, with the American Tyler Farrar. But they too have announced that they will not be committing men to control the bunch all day long. Team boss Jonathan Vaughters told Velonation this week:

Tyler is in a role where he can be the joker in the field sprints; I don’t see us pulling the bunch along for 120 kilometres, like we did in the past.

Of course, there will be other sprinters in the race such as Marcel Kittel, Peter Sagan and Andre Greipel. But with Cavendish also present we could see a stalemate where all the teams look at one another, passing on responsibility while the gap between the peloton and the breakaway grows and grows.

Then there are the mountain stages where the sprinters teams obviously have no interest. On these days, the peloton patrol is usually performed by the team of the current yellow jersey wearer, or by the big G.C. favourite.

Alberto Contador - Conspicuous by his absence

Before his crash in the Tour de Suisse ruled him out of the Tour, in this month’s Cycle Sport magazine, Andy Schleck had this to say about having an out and out favourite present at the Tour de France:

The race is harder without Contador. When Alberto’s on the start line, there’s a question mark over everybody else because he’s the favourite and you know he’s going to take responsibility. Now who’s going to work and take the responsibility? I believe the others will look at Evans and me. It’s a much harder job for us than simply sitting back and watching Contador.

Evans said much the same thing to cyclingnews back in February:

Without Contador it will be harder to win the Tour de France. Now I cannot use the Spaniard as a reference point and his team will not take responsibility for the race

All of these points suggest that this year’s Tour could be far less structured and controlled than it usually is. If both the sprinters teams and the G.C. riders teams are absolving themselves of responsibility of controlling the race, the time gap of the break of the day could be left unmarshalled and the opportunists could run riot. 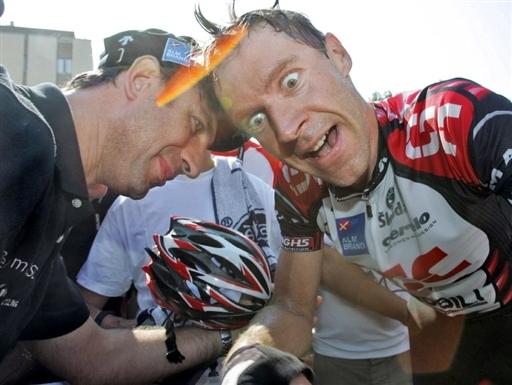 Jens Voigt after winning Stage 13 of the 2006 Tour

If a rider makes it into a break which takes half an hour or more on the peloton, and that rider is a strong time-triallist and can defend in the mountains, we could be faced with a surprise contender for the Tour de France.

Although he is a highly capable time triallist, in truth, Jens Voigt probably lacks the climbing prowess to defend a lead in the high mountains. But there are plenty of riders who do fit the bill and are no strangers to making it into a breakaway. As it happens, Voigt won the stage that day that Pereiro took the yellow jersey in 2006. But another rider in that break was Sylvain Chavanel, who fits our description perfectly. As do the likes of Luis Leon Sanchez, Rein Tarramae and Lieuwe Westra.

While it will take a perfect set of circumstances for this scenario to play out, the ingredients are all there this year more than most for one rider to ‘do a Walkowiak’ and surprise us all.

Vuelta 2011 – The best stage race of the year?
The 2011 Tour de France by numbers
How the big contenders have prepared for the Tour
Team-mates in the Tour
Reflections on a wonderful Tour