A home Tour de France stage win – but not in France

But the Tour de France hasn’t always been confined France itself. Just this year the great race got underway in Liége and as recently as 2010 it visited Belgium and Holland. If we include the principalities of Andorra and Monaco, the Tour de France has visited 11 different foreign lands in its history. This means that it is not just French riders who have the opportunity to ride, and possibly win, a stage of the Tour de France on home soil.

It is a traditional spectacle in cycling that when any race skirts the home region or passes through the home town of a rider in the peloton, that we see that rider attempt to make it in to the day’s breakaway. The rider wants to show himself in front of his own kin and provide his home support with a display of strength and showmanship. 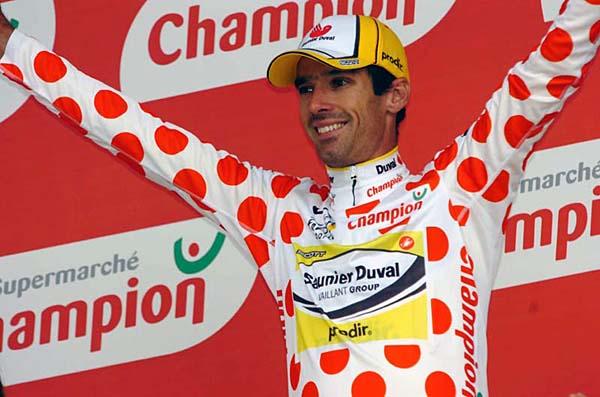 When the Tour de France visits another country, the effect is the same, but it is an entire nationality of riders who yearn to be noticed and strive for success in their homeland.

The Tour de France began in Dublin in 1998 but it came too late for Ireland’s greatest cyclists to experience the world’s biggest race visiting their home country. Stephen Roche and Sean Kelly had both retired several years earlier and sadly there were to be no Irish riders at all in the race. Upon hearing the confirmation that Dublin had been awarded the Grand Départ, Kelly had this to say:

The Tour coming here is a marvellous boost for the sport and the industry. If anyone mentioned it a few years ago I would have laughed at the idea. However, my one regret is that there are no Irish riders competing at the top level now, so we will not have anyone taking part…It would have been great for it to come here when Stephen and I were competing, but that just didn’t happen.

Kelly’s sentiments were echoed by Roche:

It is wonderful news. But it is a little disappointing there will be no Irish competitors at the highest level. It’s a pity the Federation of Irish Cyclists did not build on the success Sean and I achieved but now you could say they have a second chance.

With no Irish riders in the Tour there was obviously no Irish stage winners in 1998. However, of the entire peloton, the rider born within the closest distance to Dublin won the prologue around the city centre – Chris Boardman.

The time trial specialist from the Wirral also won the prologue on his Tour debut in 1994, a year in which the Tour did visit Great Britain. Although Boardman won the stage and took the yellow jersey, and Sean Yates also wore yellow that year, neither rider won a stage on home soil. But over the years, there have been plenty of riders that have.

The most recent rider to achieve this distinction is Gert Steegmans who won Stage Two of the 2007 edition when he usurped Tom Boonen, who he was tasked with leading out, to take the bunch sprint in Ghent.

In total, there have been 27 riders who have won a stage of the Tour de France on home soil outside of France. Of those 27, there are 14 Belgians, five Italians, three Swiss, three Spanish and two Dutchmen. There are some big names on the list – Fausto Coppi, Eddy Merckx, Rik van Looy, Joop Zoetemelk. And there are some lesser known names too – Jose Nazabel Mimendia, Bernard van de Kerckhoeve and Walter Diggelmann.

It is also something which has been achieved by two brothers with Walter (Brussels 1978) and Eddy (Zolder 1981) making Mrs. Planckaert a very proud woman.

But perhaps the most interesting rider on the list is the one who got there first. Leo Amberg from Switzerland won Stage 5C of the 1937 Tour de France ahead of his compatriot Robert Zimmermann (no, not Bob Dylan) in a solo breakaway into Geneva. Leo Amberg- One of only three riders to have won a home stage of the Giro and the Tour outside of Italy and France respectively.

As if winning a stage of the Tour de France in his home country of Switzerland wasn’t enough, Amberg repeated the trick in the Giro d’Italia the following year. Stage 18a of the 1938 Giro was exactly 100km raced from Varese to Locarno where Amberg again crossed the line solo, this time almost 10 minutes clear of everyone else.

And as if that wasn’t enough, Amberg won both of these Grand Tour stages on home Swiss soil while wearing the national champion’s jersey, having won the title in both 1937 and 1938.

Amberg can be forgiven for not completing an unprecedented hat-trick as the Vuelta a Espana, after two false starts interrupted by war, only really got going in 1945 at which point his career was winding down (although Amberg did find time to win a team time trial at the 1947 Tour of Romandie with team-mates Hugo Koblet and Walter Diggelmann – the only three Swiss riders who have won stages of the Tour de France in Switzerland).

In the proceeding years, the Vuelta, by far the most conservative of the three Grand Tours when it comes to crossing borders, has never entered into Switzerland anyway. However, Amberg did ride the Vuelta once in 1935, the first ever edition of the race, where he finished 13th overall and came third in the mountains competition. Amberg is also notable for being the first Swiss rider (and third rider ever) to complete all three of cycling’s Grand Tours.