Which rider won the Tour de France in a year in which he did not even take part in the race?

The answer, unsurprisingly, involves a disqualification and a subsequent default winner. The answer is also going through the worst year in his career thus far as a cyclist. The answer is Andy Schleck.

Earlier this year, Alberto Contador was banned and stripped of several victories including the 2010 Tour de France in which Schleck finished second. As such, in May of this year, Schleck was officially awarded the yellow jersey as winner of the 2010 Tour. So far this has been his only victory this year.

Schleck hasn’t finished in the top 20 of any race (or on any stage of any race) in 2012. A crash in the time trial of the Criterium du Dauphine in June has meant he hasn’t raced since. Initially, the injury was not thought to be too serious as the Luxembourger continued in the week long race. But eventually the pain became too much and he abandoned two days later.

Andy Schleck after his crash in the Criterium du Dauphine

It soon became apparent that he had a fracture in his sacrum which was causing major spinal problems. Schleck was forced to withdraw from participating in this year’s Tour de France and instead turned his focus to regaining full fitness for the Vuelta.

But race after race has gone by where Schleck has not been sufficiently recovered from his injuries to take to the startline. He was named as part of the Luxembourg Olympic team but officially withdrew before the games began. He was on the provisional startlist for the upcoming Vuelta a Espana but will now not be present this weekend. And his latest disappointment will be chalking the US Pro Cycling Challenge off his racing calendar as he is still suffering from back pain due to the injuries suffered in that Dauphiné time trial. 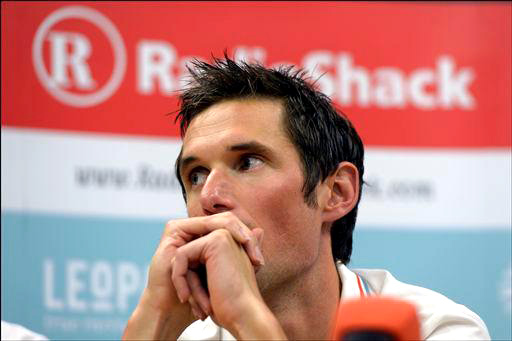 Dealing with an injury which has been so devastating to his racing plans would be mentally draining at any stage in Schleck’s career, but his problems have been compounded by his brother Frank testing positive for a banned diuretic during the Tour which meant a bad year immediately got unimaginably worse. The upheavel and general mismanagement of his Radioshack-Nissan team has also been a source of strife and negativity for Schleck this season.

The fact that Andy Schleck will not ride the Vuelta means that he won’t have ridden any Grand Tour this year. In the past 50 years, this has only happened to a former Tour winner on four occasions.

The most recent Tour winner to miss out on riding a Grand Tour all year was Jan Ullrich in 2002. He tested positive for an amphetamine before the Tour, was fired by his team and was banned for six months. Before Ullrich, in 1988 Stephen Roche had one of the worst years ever experienced by the reigning world champion as he missed most of the season due to a knee injury. Prior to that, in the wake of his maiden Tour victory in 1986, Greg LeMond was shot in a hunting accident and almost died. And finally, double Tour winner Laurent Fignon failed to start a Grand Tour in 1985 as, similarly to Roche, he suffered from a bad knee injury.

In a recent interview, Alberto Contador suggested having to deal with his ‘two year ban’, being stripped of his victories and coping with the protracted legal process has made him stronger:

The whole last two years has been hard because they say everything about me without any limit. Luckily, I have my family and my friends. Thanks to them I did not need to seek help from any professional. They are the ones who have given me encouragement.

It is true that in some ways the illusion that I had eight years ago is gone. It has made me grow up and see cycling as a part of my life, but not my whole life. I have faced difficult situations which will help deal with stressful situations in the future.

Those six months have been difficult and I’ll remember them forever.

While dealing with a ban for doping is rather different than dealing with a debilitating injury, both situations provide mental and physical challenges and to overcome them require a steady support structure and a steely determination. The Schlecks, who clearly rely on each other emotionally and tactically, are now faced with both nightmare scenarios.

LeMond returned from his near death experience and won two more Tours de France and another rainbow jersey. Fignon returned and won Milan San Remo twice and the Giro d’Italia. Jan Ullrich reappeared at the Tour in 2003 and came closer than anyone ever did to beating Lance Armstrong.

On the other end of the scale however, Roche was never the same after his horrific year in 1988. He won races upon his return, including a Tour stage in 1992, but would never again challenge for the overall victory in the major races.

It remains to be seen how well Andy Schleck will cope upon returning from his own annus horriblis. He has been criticised constantly over the years for his meek racing style and a lack of conviction that riders like Contador have no shortage of.

The double setback of his spinal injury and his brother’s positive test will stretch Schleck’s resolve further than any Grand Tour ever could. Depending on how he deals with this stress and all of the forthcoming challenges will shape the rider we will see return in the coming months and years

One thing should not be forgotten, Andy Schleck is a bloody good bike rider. He’s finished on the podium of the biggest race in the world three times and he has won Liége-Bastogne-Liége in imperious fashion. If Schleck can recover from these setbacks, next year he will have a point to prove and he will most certainly not want to be remembered simply as the guy who won the Tour in the year he didn’t even ride it.