Before twitter, before the internet, before televisions were to be found in every home, it was the remit of cycling journalists to mythologise the sport on which they were reporting. The feats of these men with no fear who cycled bikes with no gears were exaggerated, embellished and taken as far into the realm of the fantastical as the reader was willing to be taken.

Thus it is entirely appropriate that the most famous of Ireland’s races has its name rooted in the mythology which shaped the country itself. Although it was men who entered and competed, it was a deity of the female variety who provided the name for the Rás Tailteann. Depiction of the Fír Bolg in battle

Tailtiu was a Goddess who belonged to the Fír Bolg, a race which ruled Ireland before they were overpowered by the Tuatha de Dannan. Upon her death, her foster son Lúgh (father of Cúchulainn) established a festival and games in her honour which took place around her burial place in what is now called County Meath. The Tailteann games, as they were known, died out in the 18th century but an attempt to revive them was made in the 1920’s by the Gaelic Athletic Association.

The GAA was and is a symbol of nationalism, a representation of an Ireland made up of 32 counties. In 1953, there were three cycling associations in Ireland. There was the Cumann Rothaíochta na hÉireann (CRE) which presided over the 26 counties of the Republic of Ireland and there was the Northern Ireland Cycling Federation (NICF) which oversaw the remaining six counties. Both the CRE and the NICF were recognised by the world cycling governing body, the UCI.

The third association of the day was the National Cycling Association (NCA) which recognised Ireland as consisting of 32 counties, a decision which meant that the NCA itself remained unrecognised by the UCI. Offical Rás program from 1958 - that year's race was, appropriately, held in the month of Lughnasa (August)

Consequently, when the NCA decided to concoct its very own stage race in response to the CRE’s Tour of Ireland, the race organisers borrowed the name of the historical games endorsed by the GAA which sought to symbolise Irish nationalism – the Rás Tailteann was born.

Although it bore a mythological name, the first edition of the Rás was a more modest affair than many of its subsequent editions. In the 1970’s and 1980’s there were editions which had as many as 13 stages. But on the 19th September 1953, the pioneering men of the Rás took to the startline of the first of just two stages, 90 miles from Dublin to Wexford and a slightly longer 110 mile route back to Dublin the following day.

Starting outside the G.P.O. on Dublin’s O’Connell street, the main site of the 1916 Easter Rising, the first ever stage of the Rás was won by a Corkman called Mick Carr. He had broken away on the approach to Wexford and held off a chase group to win by 34 seconds. The stage finish in Wexford was not on the route by chance as it too was a nod towards Irish nationalism as it was the site of another famous rising, the Rebellion of 1798. 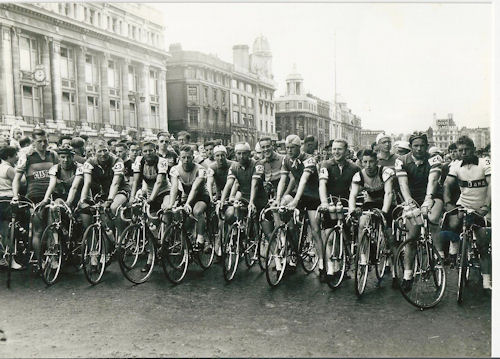 Although Carr held the race lead going into stage two, for an event which was imbued with mythology and political history before any pedal was turned, the race demanded a special man to take the first ever overall victory. It is said that a seventh son of a seventh son is blessed with special powers and it was such a man who cycled his way into Irish history during the race back to Dublin.

Colm Christle formed part of a nine man breakaway which united just before the riders reached Carlow. The group worked nicely together knowing that if they co-operated, each was in with a chance of victory, but just a few miles later, Christle punctured. His quest to become the first ever winner of the Rás was saved by Frank Reilly (hailing from very close to Telltown in Co. Meath, a place named after the burial ground of Tailtiu) who offered up his own wheel as a replacement.

The Gods may have been smiling on Christle on that occasion, but as he worked his way back to the leading group, punctures were not the only source of concern for the St. James’ Gate rider.

Colm Christle - winner of the 153 Rás Tailteann (via rastailteann.com)

My only living memory of that Rás, apart from winning it, was when I was in the break early on the second day, I started getting a cramp on my right thigh and calf muscle. This problem affected me almost the whole way to the finish, but thank God it held up and we won it.

Christle overcame his cramping problems and remained strong enough to beat Wexford man Owen Culleton in a sprint finish on the Crumlin Road by one and a half bike lengths. In the first edition of the Rás, Christle had won the final stage to take the race lead for the first time, he remains the only rider to have won the Rás in this manner. He also won the sprints competition which was decided by four sprint primes over the two days of racing and he was part of the St. James’ Gate team which won the team classification. The Rás had its first hero, although Christle was perhaps unaware of that at the time.

I suppose more by accident than by design, you sort of become an historic figure unbeknownst to yourself.

Although Christle won the Rás in 1953, just three years later he had hung up his wheels to concentrate on his studies. He was a student of Law at University College Dublin and would go on to become a barrister. But he will always be best remembered for being that special rider who won the very first edition of Ireland’s mythological race.

There is an upcoming get together of ‘The Men of the Rás’ from the 1950s and 1960s. This event is due to be held on the 17th & 18th October at Louis Moriarty’s Sneem Hotel in Kerry. Rás winners such as Colm Christle, Gene Mangan, Paudie Fitzgerald and Mick Murphy are expected to attend.

For more information on accomodation and activites regarding this event, contact the Sneem Hotel:
Phone – +353 (0)64 75100
Email – information@sneemhotel.com