Whenever a rider wins the Tour de France, after the initial fanfare has abated, the celebrations have fizzled out and the winter starts to bite, the successful cyclist will begin to plan out his training regime and start working towards next year’s goal – winning the Tour de France again.

The same is not true of cycling’s other two Grand Tours, the Giro d’Italia and the Vuelta a Espana. In recent years, the cream of the crop of G.C. riders tend to steer clear of the Giro as received wisdom suggests it does not provide the preparation required to tackle the Tour de France a month later. Consequently, the Giro is contested largely by riders who are not their team’s best G.C. rider along with the usual smattering of Italian favourites seeking glory on home soil.

The Vuelta however tends to attract a slightly different crowd. This is due to its position on the calendar, coming as it does after the Tour de France and relatively late in the season. The Vuelta can be a race of redemption for riders who have under-performed throughout the year. It can also be a race of rehabilitation as riders who missed the Tour due to injury use the Spanish Grand Tour as a platform for their comeback. While, like the Giro, it also holds host to the local boys eager to please their home fans.

For example, the 2012 Vuelta saw an appearance from Chris Froome, who was aiming to prove he had what it took to be team leader after shepherding Bradley Wiggins to Tour glory. Robert Gesink was present having crashed and abandoned the Tour de France in July. While we also witnessed the successful Grand Tour comeback of Alberto Contador as he returned from his ‘two year’ suspension.

The ad hoc nature of riders appearing at the Vuelta means that regularly the reigning champion does not turn up to defend his crown. This in turn means that there are very few riders who have won back to back Vueltas a Espana, five to be exact – Gustaaf Deloor, Julian Berrendero, Tony Rominger, Alex Zulle and Roberto Heras. Compare this to the Tour where 12 riders have managed to successfully defend their winner’s jersey.

Whenever a rider does decide to return to Spain the year after they’ve won the Vuelta, although only five have triumphed, the efforts have been far from terrible. Of all the riders who rode the Vuelta the year after they won it, and finished the race (that’s 22 riders), none of them finished outside the top 20 overall…until this year.

Juan José Cobo won the 2011 Vuelta a Espana after a dominant stage winning display on the mountain top finish of the Angliru where he finished 48 seconds ahead of Chris Froome who he would beat into Madrid by a mere 13 seconds. A couple of weeks later, Cobo finished ninth at the Memorial Marco Pantani, but since then he has failed to finish in the top 10 of any race, or indeed any stage of any race (apart from a 10th place at the national time trial championships). Cobo took to the startline of this year’s Vuelta but could only muster a lowly 67th position overall, the worst defence in the history of the race. So what went wrong?

By all accounts Cobo is a mentally fragile character who at times can suffer from an acute lack of confidence. Upon winning the 2011 Vuelta he admitted to suffering from depression. In a recent article in Pro Cycling Magazine, Cobo himself highlighted this problem:

I remember when I won the Tour of the Basque Country in 2007, the year after, I messed up completely. I was just too blocked to be able to do anything. I was too scared of failing. [At the time, the team announced that Cobo had been pulled from the race because of flu.] But I don’t want to be scared of failing. The physiological aspect of racing, in my case, is more important than the physical side.

This time in the Vuelta, I should be okay, as long as I do things day by day. Maybe there will be a team-mate who’s going better than me. In any case, just because you win one year shouldn’t mean people automatically think you’ll win the next. Should it? 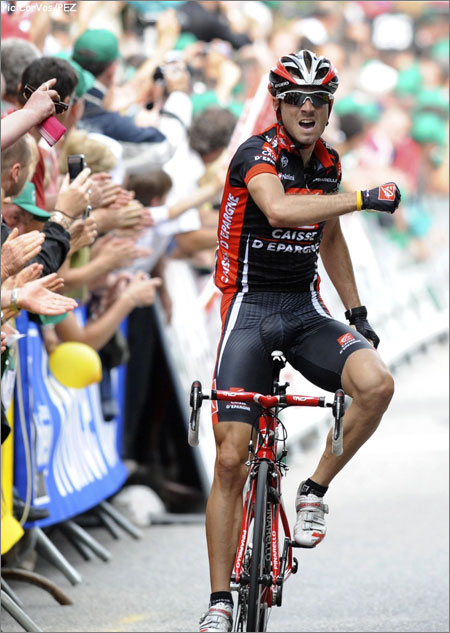 In the same article it is revealed that Cobo considered quitting cycling halfway through 2011 to become an electrician. What may also have added to Cobo’s poor performance at the recent Vuelta was the presence of team figurehead Alejandro Valverde who returned from a doping suspension earlier this year and like Cobo, is also a former Vuelta winner. Movistar team boss Eusebio Unzue declared the following before this year’s edition:

We will start with Juanjo Cobo as team leader. Last year, he proved he can fight for a Grand Tour as he beat a strong rider like Froome, who could have been the Tour winner this season. After that, there’s a question mark over Alejandro, who already has a huge season schedule on his legs, but his willingness and the brilliance he always brings to the squad makes us sure he will be making another effort to fight for a stage victory, to say the least.

The fact that Unzue was only willing to ‘start’ with Cobo as leader may have diminished his confidence somewhat – a confidence which was apparently already lacking. But perhaps being considered a leader at all may have also adversely affected Cobo’s mental state. In 2011 his team-mates included former Tour winner Carlos Sastre and double Vuelta winner Denis Menchov. Thus, the man they call the Bison was expected to be a domestqiue and nothing more, thereby avoiding any pressure in the build-up to the race.

However, the possibility that Cobo was lacking more than just confidence this year has also been mooted. Jean-Francois Bernard spoke out in l’Équipe about his lack of belief in Cobo’s Vuelta winning performance in 2011:

This demonstration makes me neither hot nor cold. It even leaves me completely perplexed. I do not believe at all in his sincerity. We do not know where [this performance] comes from, and especially from where he has returned. Apart from the Tour of Burgos (in early August) where he finished third overall, he did not exist until then! In Angliru nobody could follow him… [well] Pantani could have. Or a Contador in top shape. No, really, it’s a little too much.

If there’s a whiff of incredibility about Cobo’s Grand Tour win, it is only worsened by the fact that he was a prominent member of the Saunier Duval team managed by Mauro Gianetti which withdrew from the Tour de France in 2008 after Riccardo Ricco tested positive for CERA. Another of his team-mates, Leonardo Piepoli later also tested positive.

So what next for Juan José Cobo? Well having recently finished on the podium of both the Vuelta and world road race championships, Movistar team leader Alejandro Valverde is still a force to be reckoned with and will be leader once again next year. This might suit Cobo just fine, to settle back into the super-domestique role which he has occupied for most of his career.

Cobo does not fall into this category, as his palmarés is one of the more modest of any Grand Tour winner with ‘only’ a Tour de France stage win and a Tour of the Basque Country title to keep his Vuelta winner’s trophy company. No, instead Cobo will likely fall into the cracks of the sports history which are currently occupied by the likes of﻿ Angel Casero and Aitor Gonzalez.

Like so many of cycling’s champions, due to his choice of teams and team managers, there will always be innuendo and question marks about Juan José Cobo. But he is a Grand Tour winner and will be content with what he has managed to achieve, especially given he has dealt with depression throughout the most testing time in his career.

I’ve passed through some bad moments the past few months, but now I see things differently. You realise that hard work and sacrifice are worth it – this win makes up for the suffering that I’ve gone through on the bike….I came to the Vuelta to help Carlos Sastre and Denis Menchov and three weeks later, I’m here to talk about winning the Tour of Spain, it’s unbelievable!