A leader of a cycling team must have a strong personality, a will to win and the ability to get results. Some leaders are the quiet type that like to lead by example, think Carlos Sastre, while others are more vocal but still have no problem getting the job done, Mark Cavendish springs to mind. The leader who is vocal and yet can’t back up his words with performances will inevitably lose the trust of his team-mates and will shortly thereafter no longer deserve the status of leader at all.

‘Leadership and learning are indispensable to one another’ said a great U.S. leader of Irish descent. A current leader of more established Irish descent could have done with listening to these words of John F. Kennedy for he has now come to the end of the road as leader of his cycling team.

Nicolas Roche is a good cyclist who has the potential to win many races. But in the four years he has now spent with the French AG2R-La Mondiale team he has won only two of them, the Irish national road race championships in 2009 and a stage of the inaugural Tour of Beijing last year. As a rider who has unabating aspirations to reach the top 10 in the general classification of Grand Tours, you would also expect Roche to be a challenger in minor stage races but he is yet to win a stage race of any description since he turned professional.

His blinkered focus on attaining a top 10 of the Tour de France has blighted his career so far. He spends all year gaining fitness and honing his form for the Tour and when he gets there he seems to constantly hover around the G.C. places which make him too much of a risk for the other leaders to let into a breakaway and yet there are always 10 or more better riders than him preventing him from clinging on to a top 10 place overall.

But Roche’s decision to tie himself up in this situation is not due to naivety or a basic lack of knowledge of how stage races work. Roche knows these things and acknowledges them and yet he chooses to willingly enter stage race oblivion anyway. Writing in his daily Vuelta diary in the Irish Independent, he said the following:

Although my ultimate goal for the team is to win a stage, I don’t want to give up my high G.C. position to do so, even if it would make the task a bit easier. Some riders who ride big three-week Tours with the sole aim of winning a stage lose time on purpose on certain days, sparing their energy for an all-out assault on whatever stage they feel they have a chance to win. But I can’t do that.

I prefer to continue to ride hard for the overall classification and try to go for a stage at the same time. I realise the fact that I’m not too far down on the race leader means I won’t be given much rope, but that’s the way I won a stage in Beijing last year and I will try to do the same here.

Roche talks about leadership, he wants to maintain his high position and win a stage. Admirable sure, but over-ambitious? Almost certainly.

The very next day, Roche writes the following in his Vuelta diary:

I tried to get across to the move a few times on the climb but every time I moved I was nailed by one of the Rabobank duo of Laurens ten Dam (eighth) or Robert Gesink (sixth), who were afraid I would gain enough time to overtake them in the overall standings.

When I saw that we had left a couple of guys, like fifth-placed Daniel Moreno, behind I tried to attack but, once again, the Rabobank guys chased me down so I resigned myself to just riding with them for the rest of the climb. That’s the difference between me and Contador. When I attack, Gesink is able to follow me. When Contador attacks nobody is able to follow him.

Leadership and learning may be indispensable to one another, but Roche the leader just isn’t learning. He knows why he’s not being afforded chances to win stages, he has explained why in a national newspaper. These are his own words but he is choosing not to learn from them. Despite the fact that next year he will be part of a team which is led by multiple Grand Tour winner Alberto Contador, Roche announced on Irish radio recently that he still harbours hopes of a stage win in next year’s Tour de France while riding in tandem with the Spaniard to a high G.C. place.

Perhaps Roche is unaware of just how difficult that task actually is. Has he ever sat down and wondered how many other riders have been capable of winning a stage of the Tour de France while they occupy a spot in the top 10 overall? Does he realise what a monumental challenge this actually is?

Let’s rule out the opening week of the Tour, where the race hasn’t hit the mountains yet and the G.C hasn’t yet taken shape. Before the 2008 Tour, there were also time bonuses available which meant that sprinters like Mario Cipollini and Robbie McEwen often won stages while in the top 10 on G.C. 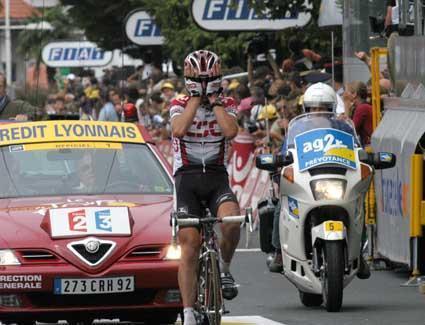 Tyler Hamilton winning Stage 16 of the 2003 Tour while in 7th place overall.

But ignoring these opening exchanges between the sprinters and getting to the hard grind of getting over mountains in the second and third week of the Tour – in the past ten years there are eight riders who have achieved this feat. All bar one of these eight riders have finished on the podium of a Grand Tour. The eight are – Andy Schleck, Joaquin Rodriguez, Alberto Contador, Frank Schleck, Carlos Sastre, Michael Rasmussen, Alexander Vinokourov, Lance Armstrong and Tyler Hamilton.

All of these riders, for one reason or another, were operating on another level to the one which Roche is on right now. The identities of these riders also show that stage winning opportunities for top 10 riders are not dished out easily and it takes exceptional climbing talent to pull it off. Nicolas Roche is not an exceptionally talented climber.

A major reason for Roche’s fixation on achieving a Tour de France top 10, and is also the main reason why he is also fixated on it at the Vuelta, is UCI World Tour points. These precious points go a long way towards guaranteeing your team the top Pro Team status for the following year.

The accumulation of points has been a constant battle for Roche’s AG2R-La Mondiale team for the past number of years. So much so that last year they signed a bunch of misfits from various countries who happened to have points which helped with their application for Pro Team status. It is a flaw in the system that points belong to the rider rather than the team. Thus, the team management bought points rather than earned them which, ironically enough, has perhaps contributed to a disjointed sqaud of riders which has made it even harder to earn points this year. 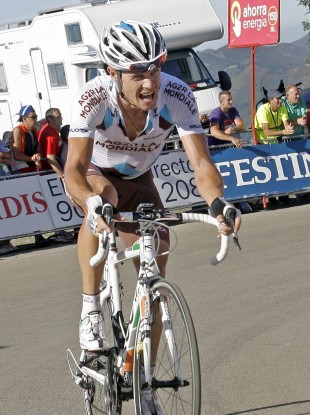 It seems unnecessary for Roche to be chasing points at the Vuelta given that he is moving to Saxo Bank-Tinkoff next year where Contador will likely be riding around as the new Vuelta champion along with all the points the team need. But not if the UCI have their way for they are attempting to apply a rule which stops riders returning from a ban from earning any points for two years thereafter. It remains to be seen whether this will be enforceable or not. In the meantime, Roche is desperatley hanging on to his 26 points which his 12th place at the Vuelta currently gives him.

He said this in his most recent Vuelta diary:

I’m 12th overall now and pretty p****d off. The only chance I have of breaking back into the top 10 is on the second last stage on Saturday, which finishes up the savagely steep climb to Bola de Mundo. Anything can happen but I’m two minutes and 11 seconds behind 10th-placed Intxausti now and that’s a lot.

It is a quirk of evolution that Roche is pissed off about being in 12th and not in 10th. Humans find pleasure and comfort in multiples of ten because we have ten fingers and ten toes. If Roche was a robot, he’d feel more at home sitting in 16th place overall.

The 10th place he is so focused on would earn him and his new team 38 UCI points. But why not focus on winning races like the Tour de Romandie or the Volta a Catalunya which would give him 100 points? Or, as the UCI have placed so much pressure on riders to gain points, why not focus on finishing fourth in the Tour of Poland instead? This would give him 40 points and would be equally as memorable as a 10th place at the Vuelta.

Either way, for the first time in three years, Roche will soon no longer be a leader. Maybe this is a good thing. He was dispensing with any learning to be gained from being a leader of his team. Perhaps now he will learn more and win more without the heavy burden which leadership bestows.

Beware the wounded Schleck
Vuelta 2011 – The best stage race of the year?
Tour de France Stats Overload
As if from nowhere…a Tour winner
The Curse of the White Jersey