As if from nowhere…a Tour winner

The Tour de France is like life. It’s not a game, or a series of games. It’s a two-thousand-mile, month-long odyssey that creates and breaks heroes, elevates some while diminishing others. There’s unspeakable triumph and heartbreak, not in fleeting moments but washing over you for sustained periods. There are disasters, and illnesses. Babies are born while racers speed simultaneously away from and toward home. Deep friendships develop. Rivalries, too. Bikes crash. So do cars. There are cheaters — and there always have been, though the methods have varied. The Tour de France is the only sporting event, someone once said, so long that you have to get your hair cut in the middle of it. This messiness and glory is what I think of when I say the Tour de France is like life itself. It was always where I had most desired and most sought to prove myself.

Needless to say, the Tour de France is hard and hard work wins it. It requires a lifetime of dedication, both mentally and physically. Quite apart from winning, it is undoubtedly one of the hardest events in the world to even finish. Naturally, since the event began in 1903, cheating has been a part of it. What was grabbing on to cars and hitching a ride on trains in the early 20th century is now drug trafficking, blood transfusions and bribery. There are not many Tour winners who have remained untainted by scandals since the race’s inception.

Carlos Sastre is one of the few Tour de France winners who was never directly implicated in a doping scandal. If we consider the Spaniard’s finishing positions from his first Tour in 2001 right up until he won it seven years later, we can see a gradual improvement year on year (apart from the obvious exception of 2005): 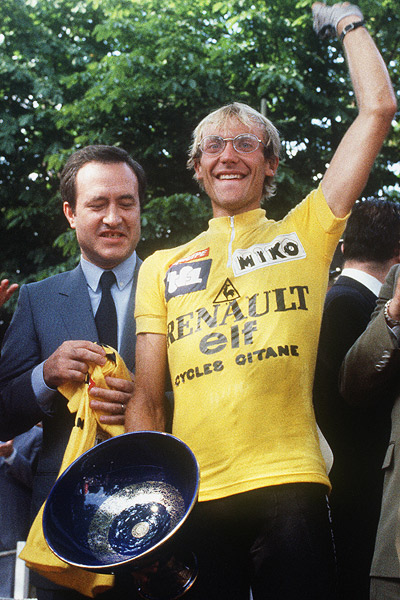 Sastre won the Tour after he had gained a wealth of experience in not winning the race. However, there are several riders who have won the Tour de France at their first attempt, although it has been 30 years since this massively impressive feat has been achieved. Laurent Fignon arrived at the Tour in 1983 as the precocious understudy of Bernard Hinault. But due to an injury to the Badger, the lack of form of Joop Zoetemelk (not helped by a positive dope test which resulted in a 10 minute time penalty) and the withdrawal of Fignon’s team-mate Pascal Simon while wearing the yellow jersey, at the very first attempt, the young Frenchman took the opportunity to win a Tour bereft of out-and-out favourites.

The list of riders who have won the Tour at the first attempt are a who’s who of cycling legends which include Hinault, Eddy Merckx, Felice Gimondi, Jacques Anquetil and Fausto Coppi. But this is the exception, the rule involves many years of gaining experience and coming close to winning the world’s hardest race before eventually tasting victory, just like Carlos Sastre and more recently, like Cadel Evans and Bradley Wiggins.

However, there are another set of exceptions to the rule of hard graft. These are the riders who had ridden the Tour before but never came close to victory and then suddenly rose to prominence to take their first Tour de France win. Since World War II, there have been six riders who have won the Tour de France having never before finished in the top 10.

The first of these was Ferdi Kubler who won the Tour in 1950. He had competed in the Tour twice before, in 1947 and 1949 where he had won a stage in each and worn the yellow jersey but had never before finished the race. The year before his victory, he sat in second place overall up until Stage 10 before Fausto Coppi and Gino Bartali began their ding dong battle across the Alps which left the entire peloton in their wake. Roger Walkowiak - did 'a Walkowiak'

After Kubler came Roger Walkowiak and Lucien Aimar, two Tour champions which are viewed by some as default winners. Walkowiak won in 1956 thanks largely to his presence in a breakaway early on in the race which saw him furtively gain a massive chunk of time over the main contenders.

In 1966, Aimar was the beneficiary of the rivalry between Jacques Anquetil and Raymond Poulidor. It became apparent early on in the race that five time winner Anquetil no longer had the ability to win himself. Consequently, he put all of his efforts into ensuring the victory of Aimar in order so that Poulidor would not win. It was Aimar’s first and only podium finish at a Grand Tour.

The fourth post-war rider to have won the Tour having never before finished in the top 10 is Luis Ocana. Before his victory in 1973, Ocana had only ever finished the Tour once, in 31st place (1970). On a further three occasions he abandoned the Tour, once because of bronchitis (1972) and twice because of horrific crashes (1969 and 1971). In 1971, Ocana was in the yellow jersey and 7’23” ahead of Merckx before his crash on Stage 14. The Spaniard had earned four podium places and one overall victory in his home Grand Tour before his Tour win in 1973.

Of the four riders mentioned thus far, two were surprise winners who were on the receiving end of some very fortuitous race tactics. The other two were strong riders who had shone in the battle for a Tour win before but had been the victims of untimely and costly accidents.

The remaining two riders who won the Tour having never before finished in the top 10 came much more from out of nowhere than any of the others. Neither had even been a team leader at the Tour before and neither had ever finished above 30th place.

The two riders are Alberto Contador and Lance Armstrong.

The quote at the start of this article comes from Johan Bruyneel, once the directeur sportif of both Contador and Armstrong. He was the man in charge when both riders won their first Tours. That quote goes on to include the now detestable phrase ‘we might as well win’.

Bruyneel knew that hard work and hard work alone could not win the Tour de France. But he though he might as well win anyway. So he did.