The Irrational Persistence of a Cycling Fan

Learn from yesterday, live for today, hope for tomorrow. The important thing is not to stop questioning.

It’s the final mountain stage of the 2012 Vuelta a Espana and the riders are grinding their way up to the summit of the Bola del Mundo near Madrid. The overall leader of the Vuelta has previously been stripped of two Grand Tour titles and is returning to his first major race since serving a two year ban for doping. Less than a minute up the road is his likeliest challenger for the leader’s jersey, a rider who has been part of two of the most reprehensible teams the sport has ever known.

In between them, both on the road and on G.C., lies the rider who will join them on the podium, he is riding his first Vuelta since he won it three years previously. His prolonged absence is, like our race leader, also due to a two year ban which he received for doping. Further up the road, an innocuous breakaway has already crossed the finish line and the stage has been won by a rider who is currently under investigation for having been doped by the most notorious doctor in the history of this sport.

Just another typical day in another typical cycling race. The sport is littered with dopers, ex-dopers, facilitators of dopers, doctors who administer dope to dopers and has been for a very long time. So why do we continue to let ourselves believe in a sport which has never ceased to give us reasons to give up and stop caring?

Is it the ever-changing beauty of the arena in which the sport takes place? Do we continue to watch simply for the scenery?

The theatre in which road racing is acted out is one of cycling’s major selling points. The crisp Spring air of a Lombardian coastline, the brutal muck-drenched bergs of Belgium, the snow covered hairpins of a Swiss Alpine climb, even the hackneyed sunflower fields of a Bretagne summer – cycling can drink in whatever it wants from wherever it wants. It is not shackled by stadia, closed tracks or international borders. Cycling brings the world to our living room like no other sport can.

Sponsors know this and take advantage of it – ‘our country is beautiful, let’s show it to the world’. We are fed advertisements during races encouraging us to visit the places we are watching. The places can be so aesthetically agreeable that the advertisers’ money will not be wasted. But is this reason alone to tune into a sport we know to be so utterly tainted? Eurosport is good for that, but National Geographic is better.

What about the equipment used by the cyclists?

The bizarre sponsorship model which cycling is currently burdened with began from within the cycling industry itself. Teams were not allowed to display sponsors from any companies not involved in the cycling industry. A major role (some may say the only role) of a professional cycling team is to make money for the sponsor. Although it is rare in modern times to have a cycling brand as the primary sponsor of a team, pro teams all ride bicycles. These bicycles are provided by manufacturers in order to provide a shop window for their product, shift units and make profits.

Many cycling fans watch races not to see who wins, but for the ‘bike porn’. The new electronic shift system, the new ‘most-aero helmet ever’, (the new disc brake system?) – television production teams know this and endeavor to provide live footage of new cycling technology being used by the pros in order to please the amateurs. As a participatory sport, cycling is not cheap. There are rich men and women in lycra everywhere and they want to part with their cash by buying upgrades rather than cycling up grades. They want to be shown what is the best money can buy. And what better way to observe a machine performance than watching the best in the world win the biggest races in the world, regardless of what’s powering the human performance?

But then are we overly concerned with the human performance? It is perfectly possible to reconcile the fact that many cyclists are using performance enhancing drugs with the fact that they would not be able to produce these extraneous displays if they were not supreme athletes anyway. We are not watching unfit slobs shoot up before a race and suddenly produce titanic performances. We are watching outstanding human bodies perform outstanding feats of physical achievement and who only reach the final per cent or two of that effort by breaking the rules. 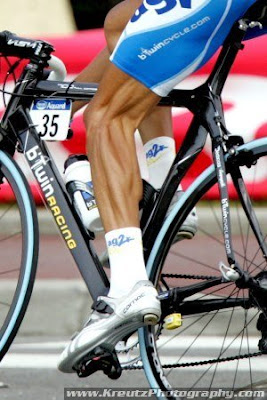 If we ignore the insight gained by relativity and human expression, it is close to impossible to perceive the difference in speed between a doped cyclist and a clean cyclist via television. With no frame of reference we cannot conclude that a rider on television is travelling at, say, 43 km/h rather than 41 km/h. Could this have an impact on our cynicism? One of the few indications we have of doping, from our couches, are closed mouth riders blasting away from a spent group of handlebar chewers. These indicators usually only emerge on summit finishes in Grand Tours, but we know doping is not confined to these occasions. So beyond this, how can we calibrate our radars of cynicism?

The question is, do we even want to?

Is the cycling fan, fundamentally, a perverse individual?  Is it possible that we enjoy the drama? Along with equipment, training, nutrition, tactics and financial backhanders, doping certainly adds an intriguing but cantankerous element to a race. It is undeniably dramatic when the winner of a race is caught and expunged. Do we enjoy this nefarious carry-on? Is it a reason to actually stick with the travelling circus we call cycling, that something compelling may occur even after the race has ended? Suddenly the beautiful theatre through which the sport travels becomes the setting for a wicked and shameless soap opera. But it’s a show we tune into every week.

The fact that we continue to watch this sport in the face of overwhelming and detestable evidence that there are cheaters in every race suggest that we are perverse, all of us. So why? Why do we do it? Why do we persist?

It is because we hope.