The curse of the rainbow jersey is a well known phenomenon within cycling. The story goes that the winner of the world road race title will be saddled with bad luck during his year as world champion. Some of the most notable examples are Jean-Pierre Monseré (killed by an oncoming vehicle during a race), Rudy Dhaenens (develoepd heart problems and was forced to retire) and Stephen Roche (had a serious knee injury and barely raced).

Of course there are exceptions which completely disprove the curse. In recent years both Tom Boonen and Mark Cavendish had massively successful stints in the rainbow jersey. The fact is that if you take the winner of any race from year to year some of them will go on to have an excellent year and some of them won’t. Although there is some element of truth to the myth in that the world champion is ‘cursed’ with huge amounts of media obligations which may eat into their sleep and training time over the winter months. 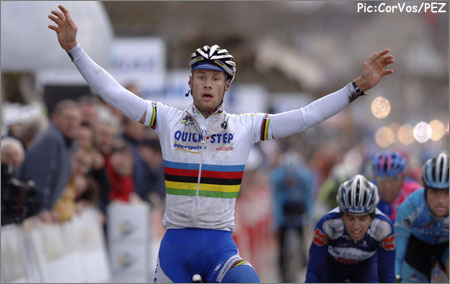 Another one of these curses is lesser known but also has a logical reason behind it. It is known as the ‘Malédiction de la Marseillaise’. This curse is bestowed upon the winner of the first race of the European cycling season, the Grand Prix d’ouverture La Marseillaise, a one day race in the south east of France.

Here, the logical reason why the winner may end up cursed, is that because they are fit enough to win so early in the season, they have peaked too soon. As a result, their form will soon be tapering off while the form of others is still on the rise, consequently making the coming months more of a struggle. The directeur sportif of the FDJ team Marc Madiot has said that it is important to be competitive throughout the race, to almost win, but not to win. This shows that the form is coming, but you’re not quite there yet.

Like the curse of the rainbow jersey, the ‘Malédiction de la Marseillaise’ only manifests itself on some occasions. Some riders truly have a miserable season while others laugh in the face of the curse and continue winning.

Bernard Hinault won La Marsellaise in 1982 and went on to become only the fourth rider ever to complete the Giro/Tour double later that year. Jan Raas and Edwig van Hooydonck both won the race and won the Tour of Flanders a few months later. More recently, Franck Vandenbroucke won the race and went on to win Liége-Bastogne-Liége and two stages and the points classification in the Vuelta a Espana.

However there are indeed examples of misery for the unfortunate winner. Jonathan Hivert, Jérémy Roy and Samuel Dumoulin, the victors from 2010-2012 all did not win another race for the entire year after they won the GP d’ouverture La Marseillaise. In 2009, although Rémi Pauriol did subseuqently win the GP di Lugano, in Paris-Nice the following week he fell and broke his collar bone.

Can Justin Jules shake off the Malédiction de la Marseillaise?

Winner in 2008, Hervé Duclos-Lassalle didn’t win another race that year and had to abandon the Tour de France on day one with a broken wrist. Jeremy Hunt, won the 2007 edition for Unibet only for the team to crumble to pieces shortly thereafter.

A rider who almost won this year’s edition but didn’t, was last year’s winner Samuel Dumoulin. Perhaps he has learned his lesson from his cursed 2012 and is now taking the advice of Marc Madiot.

Now it is up to Justin Jules to defy the Malédiction de la Marseillaise as he won the 2013 edition. He rides for the local team La Pomme Marseille and it was just his second ever professional victory. Although for Jules, perhaps he had been cursed already. For many years his alcoholic stepfather had been abusive and violent towards Justin and his brother Sebastien. One night in 2004 it became too much. After his step-father had beaten his brother, Justin took the law into his own hands and killed his stepfather with an iron bar.

In 2008 Justin Jules was convicted of manslaughter and was sentenced to five years in prison, of which he served three.

Tragedy also struck Justin Jules when he was just a one year old child. His biological father Pascal was tragically killed in a car crash aged just 26. Pascal Jules was a Tour de France stage winner and a team-mate of Bernard Hinault and Laurent Fignon at the Renault-Elf team in the early eighties