This article is the second in a series which will be published daily throughout the 2013 edition of the Rás. I’ve taken the finish town of each day’s stage and looked back through the history books to a time when the Rás previously raced into the same town. Other stage towns in the series are:

Gene Mangan won the fourth national championships of his career by taking the 25 mile time trial title which has held around Balbriggan in a time of 60 minutes and five seconds.

Cathal O’Reilly from the Tailteann racing club won the NCA 50 mile national road race championships in the Phoenix Park in Dublin. He was part of a 13-man move which broke clear with 10 miles to go. Running out of road and with the bunch reeling them in, two riders of the original 13 just managed to hang on to a slim lead as O’Reilly beat Tom Ryan to take the victory. Mangan was credited with joint third. It was announced that the recently opened athletics track in Santry would be expanded to include a banked cycling track outside the running track and  a stand would be erected which would cater for 9,000 spectators, with a view to increasing capacity further to 20,000 in the years to come.

The recent Tour de France was won by Charly Gaul, the first rider from Luxembourg to win cycling’s biggest race for 30 years. With just a 74km time trial and the final sprint stage into Paris remaining. Gaul trailed the Italian Vito Favero by 1’07”. But a masterful display against the clock saw Gaul put over four minutes into Favero and he won the Tour by 3’10”. Brian Robinson became the first British rider to win a stage of the Tour de France as Shay Elliott finished in 48th place overall.

Paris-Roubaix was won by the Belgian rider Leon van Daele, but it was also the closest Seamus Elliott had come to winning one of cycling’s classics. With 3km to go Elliott attacked a group of 24 riders along with another Belgian, Roger Verplaetse. As they approached the veldrome in Roubaix, they had a small gap on the rest of the group but it wasn’t to be. As the bell sounded, they were swallowed up and Elliott had to settle for 20th place.

During the Rás in early August, another Elliott, an Australian called Herb, broke the world record for running a mile at the Santry athletics track in Dublin. 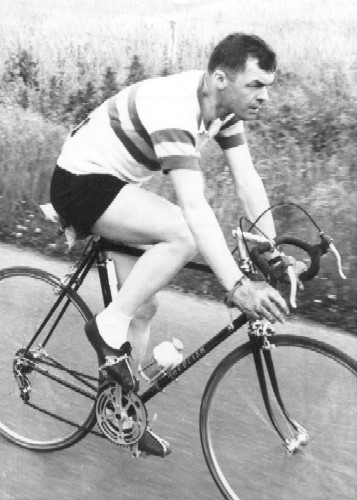 Gene Mangan, winner of four stages in a row in 1958 (Photo: www.rastailteann.com)

Earlier that year a Pele inspired Brazil won their first ever World Cup. The Munich Air Disaster took the lives of seven Manchester United footballers and 14 others and the Carlisle monument in the Phoneix Park was blown up.

After the Rás, Brendan Behan’s book Borstal Boy was published in London and was promptly banned in Ireland. The first episode of Blue Peter was broadcast on the BBC and a new organisation called NASA is formed in the United States.

The stage was won by Gene Mangan, the 1955 Rás winner, riding for the Co. Kerry team. Having been subjected to a frantic four stages over the previous few days racing, the main bunch seemingly decided to take it easy on Stage Five into Nenagh. Mangan had already made an unsuccessful break for it as race passed Patrickswell but he was caught just before Limerick.

Not to be disheartened, Mangan broke again as they left Limerick and headed for Nenagh and he had with him two formidable opponents, both future winners of the Rás, Ben McKenna and Paddy Flanagan. But Mangan proved by far the strongest as he ripped himself clear during the sprint into Nenagh to win with a gap of five seconds.

Although the stage to Nenagh was the first of four stage wins in a row for Gene Mangan, it was another Kerryman who took the overall honours, the one they call the Iron Man, Mick Murphy. 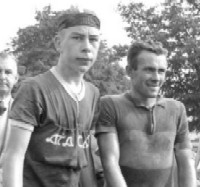 Murphy won the second stage into Kilkenny and in doing so took over the race lead and he kept it all the way back to Dublin. He had only taken up cycling the year before and was dealing with a strapped up shoulder which he had injured on the first stage. Murphy, brought up on a tiny farm just outside Cahirciveen, is legendary for his meal of choice during his cycling days – cow’s blood and raw meat.

He said he would drink cow’s blood three or four times a week and he ate the raw meat, also for the blood, claiming that it helped prevent tuberculosis. He also trained with weights made of stone.