Morbid Curiosity and the Redemption of Chris Froome

The This Week in Cycling History podcast began as exactly that. I attempted to find three stories for each show, from any year in cycling’s past, but the stories needed to have taken place in the week of the year in which we were currently in. Simple enough. But one winter of research was enough to turn me away from this idea. It was just too bloody hard to find stuff that happened in cycling over the winter months! There’s only so much track cycling a guy can wade through.

These days, thankfully, the stories are plucked from any time throughout the year although they tend to maintain some kind of relevance to whatever race is currently going on. But that one winter of desperate searches for something, anything, that happened, due to the complete lack of racing, inadvertently led me to writing about rather a lot of rider deaths.

Fausto Coppi, Jacques Anquetil, Gerrie Knetemann, Charly Gaul, Lucien Petit-Breton… all died during the winter months when the racing calendar was as sparse as it gets. So they provided plenty of opportunity for telling tales for the show, unfortunately, tales of tragedy,

But since then, after the show moved to a more loose rule on the timetable of historical stories, I find myself constantly drawn to the tales of tragedy even though I have carte blanche now and can steer clear if I really wanted to. This week’s grievous character is due to be a French rider named Gerard Saint who died in 1960 in a car crash and at just 25 years of age, was all set to become the next Jacques Anquetil.

The tragic figure of Gerard Saint

I’m reminded of many occasions when my co-host John would move us from one segment to another alluding to how grim the show has been so far, and how it’s about to get that bit grimmer with the next segment.

Just looking through my show notes now and I have written under the Gerard Saint story “It is human nature to lean toward the tragic stories (or is it just my nature? What does this say about me?)”.

For technical reasons (AKA Skype acting the bollocks), myself and John had to postpone recording the show which left me with a morning free to catch up on some reading. First up was an article I had saved and was looking forward to which was one that appeared on Cycling News during the week, written by Daniel Friebe about the late Frank Vandenbroucke and his performance in the 1999 Vuelta a Espana.

Unsurprisingly, it was an excellent read, a standard we’ve come to expect from Friebe. But it struck me that the articles of his that I have most enjoyed have been about truly tragic characters of cycling, Vandenbroucke himself, his once team-mate Phillipe Gaumont and an utterly outstanding bit of writing on Iljo Keisse, who is of course still living but has been seemingly followed around his entire life by woe and hardship.

I mentioned to Friebe that this was the case, that his best articles are all on the morbid side. He replied with exactly the phrase that I had set aside in my notes as a talking point: “what does that say about me?” he said.

Well it’s clear I’m not alone in my propensity for seeking out such stories, but why?

Let’s move a step back from stories of death and move to the less moribund topic of sporting downfall. Again, this is a topic I tend to focus on heavily in the This Week in Cycling History shows. Take the career of Eddy Merckx as an example. At a rough guess I would say that Merckx makes an appearance as the main character in a segment in one out of every five shows. That’s at least 15 Eddy Merckx stories over the years of the show. I can’t think of one occasion where I wrote about a story of triumph for Eddy Merckx.

There was always a tragic angle – when he was punched in the kidneys in 1975, when he was thrown off the Giro at Savona in 1969, when he was stripped of victory at the 1973 Tour of Lombardy or any number of stories of one of his rivals whose careers he ruined as a by-product of being so dominant.

I was going to ask John, if this bent toward the woeful rather than the cheerful is just human nature. But I already know the answer to my loaded question. It IS human nature to take an interest in these things.

How interesting is it, really, to talk to a guy who has just won a race? How does it feel to have crossed the line first? How did you go about preparing for this victory? How much of this victory do you owe to your team-mates? We can guess the answers before we hear them. The interview of a winner is rarely interesting because we’ve heard it all before. This is because, by and large, there is only one way to win. Prepare well, stay focused, be one of the strongest in the race and don’t do anything stupid. OK, there are many ways to win, but they are all variations on the same theme, a theme with which we must all be slightly bored, if only as an inevitable consequence of watching so much cycling.

But while there is only one way to stay focused (you just do it), there are endless ways to lose focus. For every winner who didn’t do anything stupid throughout the day, there are dozens of guys who probably did something wrong which contributed to their downfall. Winning is a difficult task, but a simple compound of ingredients. Losing is a less tangible, whispish affair which can take its ingredients from anyone, any place or anything. Something which is absolutely useless to the recipe of success, can be the main, indigestible ingredient in a tale of loss and sorrow.

This is why the post-stage interrogations of the guys who were beaten on the day are invariably more interesting and provide the interviewers with greater ammunition for any subsequent stories. I recall Mark Cavendish once bemoaning the fact that it was only when he lost that he made headlines. Winning had become expected and bland, people only became intrigued when he failed. Why did you fail Mark? What went wrong? We already know how he wins, we want to know of his possible weakness and any flaw which might be slowly becoming apparent in his abilities. The vulturistic cycling fan, ready to feed on another tragic carcass. 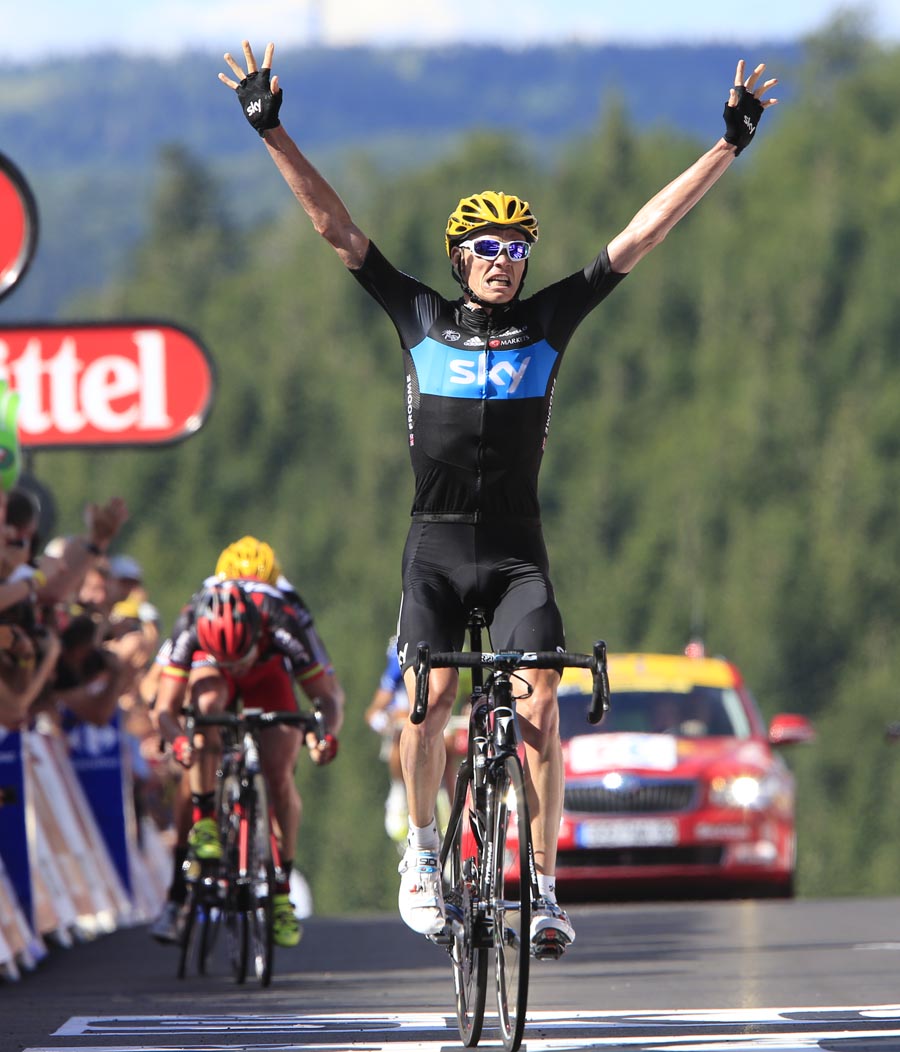 This idea, to bring us into more contemporary matters, is why the 2014 Vuelta has been good for Chris Froome. Well, perhaps not physically good for Froome himself, not yet anyway, but good for the way in which fans will view him in the remainder of this race and in races to come.

Having watched the 2013 Tour de France ( and indeed the 2012 edition, in which it seemed Froome could have won had he not been held back by his team), seeing Froome ascend Mont Ventoux the way he did and also smoke his rivals in the time trial, it would have been easy to think that the Tour winner’s identity for the next four or five years was a done deal. Nobody was gonna beat this guy. Team Sky are unpopular enough as a team and Froome, seemingly devoid of an engaging personality was not finding it easy to endear himself to a wider audience. Especially considering how dominant his performance had been.

Another winner, another monotonous tale of glory.

This is rather flippant of course. Every winner has some smidge of a story worth telling, but again, the details of how a win is achieved just isn’t going to blow our skirts up.

Froome crashed out of this year’s Tour de France before the race even reached the cobbles over which he was expected to struggle. Thus we were robbed of seeing how he would have fared against Alberto Contador and Vincenzo Nibali. But this was not enough to change the general view of Froome as the unbeatable machine we had seen at the 2013 Tour de France. He needed to be defeated on the road. Beaten by racing.

And this is what we have seen in this edition of the Vuelta. Froome has struggled, he’s shown that he is not indefatigable. Contador, Valverde and Rodriguez have been duking it out up front while Froome has ridden to his limits, alone, behind. Now we have seen him suffer, we’ve seen him have hurt done on to him as he has done on to others. We’re now ready to cheer him on. He might still win this Vuelta, and if he does it will be a victory that more people can get on board with. Now he has a story riddled with suffering, a story which might end in victory, but it is now also a story of loss and a story of pain. People want to hear these stories because ‘people’ in general don’t win the Tour de France, but us people DO suffer loss and pain, so we empathise.

But it’s not just about empathy. For to return to where we began, with a fascination in the fatal stories that permeate cycling, I obviously can have no empathy with this. But there is a link between the two themes of death and sporting loss and it is simply a darker tone to a story, a shadow cast across the sunshine features which never seem to have any depth.

I don’t think it’s unusual to be drawn to these stories of demise in life and in sport. They’re fascinating and arresting in a way that tales of glory can rarely be. It’s why there are more books on Tom Simpson than on Robert Millar, why there are always headlines when a doping story breaks, why there have been such a glut of books and films on the fall of Lance Armstrong and it’s why, despite the fact we could end up with a similar outcome, the 2014 Vuelta a Espana is a far superior race to the 2013 Tour de France.