Punch-ups, bike changes and a stolen Tour of Flanders

The gloves were off on Stage 16 of the Vuelta a Espana. Gianluca Brambilla and Ivan Rovny took issue with each other and had a boxing match while on the bike. Meanwhile, according to Philip Deignan’s daily diary in the Irish Independent, Joaquim Rodriguez bust his lip open with a punch during the stage.

While Rodriguez got away with his pugilistic misdemeanor, Brambilla and Rovny were not so fortunate, caught as they were in plain sight of a race commissaire, who took the unsual step of disqualifying them while the stage was still in progress. Unusual, but not unprecedented. For there has been a similar incident in cycling before, although one with an altogether more bizarre outcome.

In 1977, two giants of Belgian cycling Roger de Vlaeminck and Freddy Maertens took to the startline of the Tour of Flanders. De Vlaeminck was trying to complete his set of monuments classics having already won the other four. Maertens, conversely, was still looking for the first monument win of his career.

The Koppenberg was in the race for only the second year. The 600 metre climb was considered so steep that riders wanted to change bikes at the foot so that they could tackle it with a more appropriate gear ratio. But the race organisers, eager to avoid a bottleneck of bike-changing riders, came up with the rule that no rider would be allowed to change bikes throughout the race unless there was a genuine mechanical problem. 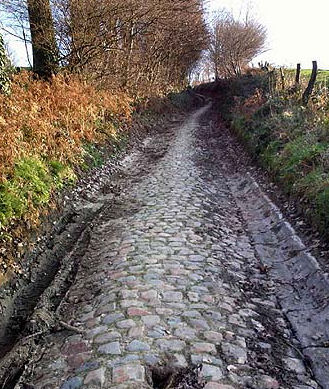 But Maertens decided rules were not for him, and that he would try and sneakily change bikes anyway. As the race unfolded, Maertens ended up at the front in a trio alongside De Vlaeminck and an ageing Eddy Merckx. The foot of the Koppenberg arrived and Maertens was met by his soigneur Jef d’Hont with a fresh bike equipped with Koppenberg-specific gearing. The bikes were swapped and off Freddy went.

But a UCI commissaire, Jos Fabri, had seen the illegal bike change and pulled up beside Maertens a short while afterward and told him that he was going to be disqualified. Maertens claimed innocence and said he would appeal. Bizarrely, Fabri allowed the current world champion to continue riding but said that once he got to the finish he would certainly be disqualified and would be removed from the final results.

Merckx had already been dropped which left Maertens on his own up front with De Vlaeminck. Knowing that he couldn’t win himself due to his impending disqualification, Maertens did the only thing that seemed reasonable given his current predicament, he asked De Vlaeminck for 300,000 Belgian francs in return for a tow to the finish.

De Vlaeminck, desperate for a win in the only monument classic that had eluded him for so many years, agreed.

So Maertens pulled De Vlaeminck to the finish for two hours. The latter didn’t do one turn on the front for those final 80km and then he nipped past Maertens in the final straight to finally win the Ronde.

De Vlaeminck crossed the line to a chorus of boos and jeers from the local fans. They knew he had not done a tap of work.

After the race, Cycling Weekly reported the following about the events that unfolded:

De Vlaeminck said – “I told Freddy that I couldn’t work with him, but I did not promise to let him take the sprint.”

The reason for this comparative lack of chivalry lies in last year’s Paris-Roubaix when Roger lost the sprint because he had worked too hard before it. He wasn’t going to have that happen again.

“Even so” said De Vlaminck, “I would much rather have won that fourth Paris-Roubaix last year than won my first Tour of Flanders like this” he confessed. “You know, if Maertens attacked me just once, I would have been able to do nothing about it”.

Ridiculously, farcically, Maertens tested positive for Stimul after the race anyway (which meant he was disqualified twice!). De Vlaeminck has never admitted paying off Freddy Maertens that day but the circumstances of the victory make it very hard to accept any other explanation.

These days, Freddy Maertens works in the Tour of Flanders museum in Oudenaarde. In the window, a row of cobblestones are displayed each with a rider’s name on it, representing the list of riders who have won the race over the years. Above the Roger de Valeminck – 1977 cobblestone, Maertens has placed his own which reads “Freddy Maertens – moral victor”.

The moral winner of the 1977 Tour of Flanders

In a 2011 interview with Maertens, the cycling writer Bill McGann asked him about this infamous incident. Maertens said:

That Tour of Flanders Roger spent 80 kilometers on my wheel. We are professional riders. You know, I made an agreement with Roger. I did not ride with Roger on my wheel for 80 kilometers for nothing. And now he wants to tell people that we never spoke about money. He paid me 150,000 Belgian francs. And then I had to give Pollentier and Demeyer the same, half and half. Where’s my share? He left me to pay 150,000 Belgian francs. But he said that I am paid and that we had never talked about money?

He liked to put it in his pocket, but he didn’t like to give any of it. No, it is not possible to live like that.

But he was good, eh? I don’t complain about when he makes a good win, but, he is not a man to have as a friend.

Herbie Sykes also recounted the tale in an article in the March 2012 edition of Pro Cycling magazine. He mentions how the pair have made up in recent years, sort of:

Following a TV programme about the saga, one of the grand old men of Flemish cycling stepped purposefully into the breach. Noel Demeulenaere had his lawyers draw up a contract. It stipulated that neither would mention the matter further and that, broadly speaking, they’d agree to be nice to one another in their dotage. Both signed it at a big slap-up dinner amid great media fanfare.

Not for nothing were they both genuine greats during Flemish cycling’s golden age and so neither has much of a grasp of the concept of retreat. As such, the substance of Demeulenaere ‘s contract is that they have simply agreed to disagree as agreeably as possible. Welcome to Flemish cycling.