The Changing Face of Cycling

Imagine you’re the manager of a cycling team and you’re looking for a particular type of rider. But instead of finding one guy that fits the job description, you find several, all with very similar physical attributes and identical salary demands – how do you decide which one to sign? The answer might be, whichever one you’re able to remember the most.

Listening to Daniel Friebe’s recent interview with Dan Craven on The Cycling Podcast would certainly lend credence to this assertion. Craven, who has just completed the Vuelta a Espana, his first ever Grand Tour, is one of the most remember-able riders in the peloton due to the considerable facial hair that he’s been cultivating for the last few years. In a sport where beards and moustaches are not all that common, Craven stands out immediately, a fact not lost on the Namibian rider when he spoke to Friebe about how he ended up signing for Team Europcar:

What have been some of the highlights or is there anything that has surprised you while doing your first Grand Tour?

I think the reaction to me…

It’s just the beard though isn’t it?

What is the future of the beard?

Basically, I think I look like an idiot without a beard.

How long have you had it? You’ve had it for quite some years, perhaps not as long as it is now…

The first time I raced with a beard was 2010 in the Rás in Ireland, the good old Rás! But ever since I was at university, I think 2001 or 2002, I started playing with facial hair, doing a goatee or sideburns. But it’s only since 2010 that I’ve actually had a beard….

So the beard’s gonna stay?

There’s no doubt about that. It’s staying. Even if it’s just because I think I look stupid without it. And I mean, after getting all of the attention that I got at this race, at the end of the day, my job is to be a billboard. And I would be kind of stupid to cut it off. If I cut my beard off I’d cut my publicity by 95% which would be very stupid. So it’ll be trimmed, but the beard is staying.
The questions put to Craven about the beard seemed to be partially in jest, and they were taken as such by Craven. But he seemed completely sincere when he spoke with clarity about the idea of getting rid of it potentially affecting his livelihood. It had got him where he is today, at the pinnacle of the sport of cycling at the unusually advanced age of 31. 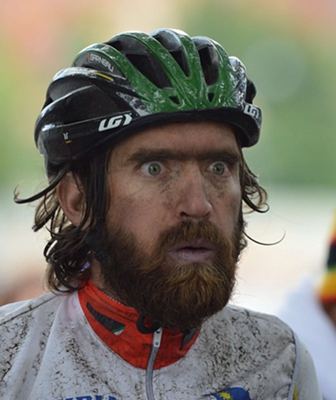 The idea that an athlete will be offered a contract based solely on some seemingly trivial physical feature is something which is covered in Soccernomics, a book written by Simon Kuper and Stefan Szymanski which takes an economic, statistical and psychological view of soccer. In a section on market inefficiencies, the authors write the following:

“At least one big English club noticed that its scouts kept recommending blonde players. The likely reason: when you are scanning a field of twenty-two similar-looking players, the blondes tend to stand out (except, presumably, in Scandinavia). The colour catches the eye. So the scout notices the blonde player without understanding why. The club in question began to take this distortion into account when judging scouting reports.

Similarly, [Billy] Beane at the Oakland A’s noticed that baseball scouts had all sorts of ‘sight-based prejudices’. They were suspicious of fat guys or skinny little guys or ‘short right-handed pitchers’ and they overvalued handsome, strapping athletes of the type that Beane himself had been at age seventeen. Scouts look for players who look the part. Perhaps in soccer, blondes are thought to look more like superstars.

This taste for blondes is an example of the ‘availability heuristic’: the more available a piece of information is to the memory, the more likely it is to influence your decision, even when the information is irrelevant. Blondes stick in the memory.”

Kuper and Szymanski don’t quite use the term ‘availability heuristic’ correctly here. This was an idea which was first proposed by psychologists Amos Tversky and Daniel Kahneman in 1973 in a paper entitled ‘Availability: A heuristic for judging frequency and probability’ where they conclude:

“Continued preoccupation with an outcome may increase its availability, and hence its perceived likelihood. People are preoccupied with highly desirable outcomes, such as winning the sweepstakes, or with highly undesirable outcomes, such as an airplane crash. Consequently, availability provides a mechanism by which occurrences of extreme utility (or disutility) may appear more likely than they actually are” Therefore, the availability heuristic in this blonde player context would be more akin to a scout who was totally enamored with Stefan Effenberg and so the blonde player he’s looking at now, he perceives as having a high probability of also being a good player.

And in the context of the bearded cyclist, using the ‘availability heuristic’ would have been more in line with Jean-René Bernaudeau very much liking Luca Paolini as a rider. So fellow-bearded man Dan Craven, concludes Bernaudeau subconsciously, must be good.

But regardless of the use of the term ‘availability heuristic’, the point Kuper and Szymanski remains applicable to the case of Craven. On the face of it (so to speak), it seems Bernaudeau did end up offering Craven a contract based largely on the fact that he has a big beard. He’s also an excellent cyclist of course. But so are many other cyclists that Bernaudeau could have signed. Craven is an excellent cyclist with a big beard.

Would Friebe have bothered to take the time to seek out Craven for an interview at the Vuelta if he was, like the rest of the peloton, clean shaven?

“There are three things about Craven that have piqued a lot of journalists’ interest” said Friebe when quizzed on the matter. “The beard, his nationality (and ethnicity – the only Namibian most people know is Frankie Fredericks, who’s black) and the fact that he’s moved up to the elite level so late in his career. When you speak to him, you realise he’s interesting for all sorts of other reasons, but I think these three are mainly what made him stand out to me and others at the Vuelta.”

Craven’s nationality is definitely a big draw, he is the first Namibian to have taken part in a Grand Tour. Perhaps there’s also a knock on affect from the Tour de France success of Chris Froome – another white African. However, the third interesting aspect that Friebe mentions, as is being argued here, could be construed as a direct consequence of the first interesting aspect, the beard.

Craven’s venture into the WorldTour, largely off the back of a memorable but ultimately, when it comes to cycling, useless physical feature, is perhaps the first venture of its kind. Given that it has already been rather successful, it may not be the last time we see a rider with an unusual and distinctive peculiarity wriggle their way into the top tier of the sport.