The last time a prize of this sort was put on offer for riders with regard to three specific races was in America in the early nineties and it led to some nefarious shenanigans. In her recent book ‘Cycle of Lies: The Fall of Lance Armstrong’, Juliet Macur describes the details of the deal: 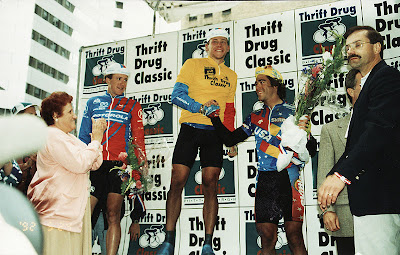 “In 1993, Armstrong chased a million-dollar bonus. The pharmacy Thrift Drug offered the prize to a rider who won three big American races – the Thrift Drug Classic in Pittsburgh, the Kmart Classic in West Virginia, and the USPRO national championship in Philadelphia.

“Armstrong, only 21, won the first race and surprised everyone. Five stages through the second race, he was among the favourites to win. So, with the possibility of a million dollar payout dangling in front of them, several riders on the Motorola team allegedly devised a plan to guarantee victory.

“They allegedly offered to pay some riders on the Coors Light team a flat fee of $50,000 to help Armstrong win the million dollar prize by not challenging him for the victory in the rest of the second race and the entire final race.

“If Armstrong won the million, both teams would benefit. Armstrong would receive the prize money – $600,000 taken in a lump sum – and would walk away with $200,000 while the balance would be distributed to his team and other cyclists who had helped him win. Each rider on Coors Light would be given $3,000 to $5,000.

“As long as America had no idea how it happened, Armstrong’s $1 million jackpot would also give cycling the positive publicity it needed to grow. It was a win-win all around”

Armstrong completed the hat-trick and so began his decades long career in skulduggery.

Admittedly, the Tinkov situation is slightly different in that the riders in question seemingly just need to take part to receive the bonus, not necessarily win. But given the history of cycling and the likelihood that ‘deals’ are still done at races, €250,000 is a lot of money to give a rider to potentially recruit help from other teams should they need it. And other teams will know that there is extra money there for negotiations.

There’s also the obvious moral dilemma of riders accepting money from a rival team owner. Would this have a conscious or even subconscious affect on how the quartet would race against each other?

But having said all that, ultimately this move from Tinkov is a load of public relations nonsense. A team manager offering to pay riders from other teams is against the UCI rules.

Getting various riders to take part in a race in exchange for money, seems like a fair definition of ‘work’ in the context of professional cycling. It could also be argued that should Froome, Quintana and Nibali take Tinkov up on his offer that they would also be providing advertising for another sponsor. Contador of course, is the exception to these stipulations as he is the only one contracted to Tinkov’s own team.

Riding and competing for the win in three Grand Tours seems impossible enough as it is. But under the terms of Tinkov’s deal, it’s against the rules of the sport and should not be allowed to happen.