Monica: And Ross, if it weren’t for Rachel’s rumor, I mean, no one in high school would even know who you were. She put you on the map!
Ross: As a romancer of the elderly!

Imagine yourself staring at this button. Would you push it?

Of course the correct answer is ‘yes’. But the correct answer to the question ‘do you want the UK to remain in the EU?’ was also ‘yes’. And 17 million people got that one wrong so what’s to stop any number of people walking away from the big red button if given the chance?

On a recent episode of the Freakonomics podcast the topic of discussion was the reasons that people follow the news. The obvious answer is that we read, watch and listen to news to inform ourselves about the world around us. We like to fill our heads with information so we can make better life choices and take more informed decisions.

But the point is raised during the course of the podcast that these actually aren’t the primary reasons we follow the news. We watch the news for entertainment. It’s simple. We like to be entertained.

The show cites a recently published academic paper entitled ‘Suspense and Surprise’ which details empirical research into this idea – that we seek out news as a source of these two qualities. The authors write in their introduction:

“People frequently seek noninstrumental information. They follow international news and sports even when no contingent actions await. We postulate that a component of this demand for noninstrumental information is its entertainment value. It is exciting to refresh the New York Times webpage to find out whether Gaddafi has been captured and to watch a baseball pitch with full count and bases loaded.”

Professor of Economics at Brown University, Jesse Shapiro shares that view on the podcast, he says:

“I think we benefit from the news being entertaining and interesting, because that also causes us to become more informed than we would be if it were bland and uninteresting.”

Isn’t that true for cycling? I would say it is certainly true for myself. I don’t know what it says about me that I was more engaged on the morning the USADA Reasoned Decision was released than I would be during an average monument classic. It’s the same innate search for entertainment which makes me lick my lips at the prospect of reading The Secret Race by Tyler Hamilton but find myself completely uninterested in reading about anything Geraint Thomas has to say about his racing career so far. 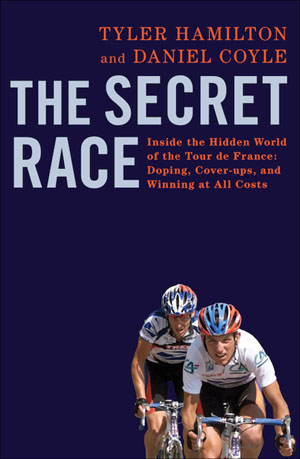 Tyler Hamilton’s book contained grim details about his doping past

Doesn’t that make me, and anyone who feels remotely like me in these situations, part of the problem? Or is it the fault of the cycling media and book publishers for constantly peddling these stories to us?

One of the authors of the aforementioned academic paper Emir Kemnica says:

“there’s a view that certain transformation of news into entertainment has been a great kind of downfall of civic society. But that kind of blames the news as opposed to the lack of interest in news when it’s not entertaining.”

So if we apply this comment to the specific world of cycling news, the implication here is that it’s actually the fault of cycle racing itself for not being interesting enough to keep everyone engaged. While we readers also need to shoulder some of the blame for not making ourselves be captivated by racing alone.

There’s a reason media outlets pounce on doping stories constantly. There’s a reason that Lance Armstrong’s ex-team mates keep churning out books. I don’t have figures to hand, but I doubt it takes an exhaustive poll to conclude that these are the stories that get read the most. Perhaps it’s because that’s what they are – stories.

A cycling race also has a story, but it’s a hard one to make interesting. What makes the stage that happened today significantly different from a stage that was raced on any other day? Usually, not much. Back in the days before television and internet, cycling reporters just made stuff up. If nothing interesting happened it didn’t matter, the flowery prose flowed regardless. Who was going to tell them they were wrong?

Journalists nowadays have no such luxury. The facts get reported and more often than not, the facts leave the cycling fan relatively cold. There’s only so many ways you can tell the story of a race.

But a doping story is multi-faceted. We like to discover the gritty details of where and how and why they doped. Who was involved? Was it anybody that was involved in any other doping case? How can we link this dark tale with any of the others that have come before? They are often intriguing and they involve a glimpse of the human character which we don’t see in mere racing.

Storytelling is what cycling fans crave. The notion of a ‘season long narrative’ gets rammed into our consciousness by a flailing UCI who still haven’t figured out how to tell the story of a cycling season. But there are stories there already, they just can’t be contextualised by a contextless ranking system displayed on a screen.

The story that the UCI wants us to find entertaining

Matt Gentzkow, a professor of Economics at Stanford University says:

“There’s a lot of research in psychology about the importance of telling stories and building narratives for people. People like to look at their own lives as a story. They like to see the arc of the challenges that they overcame and define themselves as a character in that story. And to me that makes a lot of sense of why we care so much about news, because if what I’m thinking about all the time is my own life story and my own role in it, then what’s happening in the world around me is the context that that story’s happening in.”

Don’t confuse not pressing the big red button with the notion of simply making all performance enhancing drugs legal. That’s not the premise of this thought experiment. Doping would remain illegal, it would just also remain commonplace with the stories about testing riders, catching cheats and long suspensions still present in cycling.

Don’t we like to look at dopers and tell ourselves that we would never make the same poor life choices as them? If imagining yourself in the scenario of being tempted to dope, don’t we all like to assume that we would never be as morally bereft as some of the greatest champions the sport has known? We like to place ourselves into the story that is cycling, so that we can feel better about ourselves.

We watch cycling races and presume there is a layer of subterfuge that we can’t see but we’d love to know about. We presume that some of the riders we are watching are cheaters, dopers. We love being entertained by what we see but we’re all too aware that there’s possibly a grim reason why what we’re watching is enjoyable.

You know the feeling you get when you plonk your arse down on a public toilet seat to find that it has been slightly warmed. You enjoy the fact that it has been warmed and it’s not the freezing cold you were expecting, but you try not to let your mind wander to what sort of size and shape and cleanliness the person had who warmed it. You’re just going to enjoy it for what it is.

It’s an unsettling feeling if you think about it too much, so you don’t think about it at all. We watch cycling in much the same way – we momentarily suspend our disbelief while the racing is on. But once it is over and the news cycle continues, it is inherently entertainment that we look for. And doping stories are entertaining.

The most compelling argument against doping in cycling (or any other sport) is the notion that some of the products consumed by athletes have been a contributory factor in the cause of death. Tom Simpson is the most obvious case in point when he collapsed on the way up Mont Ventoux in 1967. There have been plenty of other riders who have died from heart conditions whose cause of death was linked to the consumption of performance enhancing drugs. Ask yourself are you inclined to read this story? Or would you rather read a race report?

Perhaps the notion of riders dying due to doping is enough of an argument for anyone to push that big red button. A completely fair and logical conclusion. It’s hard to be objective about a subject as delicate as this and which involves such emotion. But when asking yourself if you would rid the sport of doping or not, consider the idea of descents from mountain tops. These have also been the cause of many deaths in cycling. Would you remove those too?

To return to the ‘Friends’ quote that we started with, for many people, doping has put cycling on the map. Of course it’s not a reason that a sport wants to be known for. However, all my friends and family know how much I enjoy following professional cycling but the vast majority of them would only be likely to begin a conversation about it with me after there has been a doping story in the news.

‘What do you think about those Operation Puerto blood bags? Will they be destroyed?”

“Did you see a British guy tested positive the other day?”

“Do you think Lance Armstrong should have his Tour de France titles given back to him?”

Nobody ever asks me ‘so were you watching Stage Two of the Four Days of Dunkirk there yesterday?’, and who could blame them? The other questions and the answers to them are more interesting. They provide more of a platform for debate and conversation amongst the average sports fan who may not necessarily have a focused interest in cycling. These doping stories do make you think about your own life story and your role within it. The doping stories are entertaining.

So… you’re staring at this big red button.

Would you push it?

The correct answer is ‘yes’.