Despite having won three of the last four Tours, Contador is not the active rider with the most days spent in the Yellow Jersey.

Cancellara has gotten rather used to pulling on the Maillot Jaune in recent years.

If Cancellara were to take the race lead in the opening week (which is unlikely given the lack of an individual time trial), he has another record in his sights – the most days spent in the Yellow Jersey without ever winning the Tour. That record is currently held by the Frenchman René Vietto who enjoyed 26 days in the race lead in two Tours de France, one either side of World War II.

A further stat which has nothing to do with this year’s Tour but is rather interesting nonetheless is that there are only two riders who have ridden more than one Tour de France and have worn the Yellow Jersey in each one. The first is Rudi Altig, who held the race lead in each of the four Tours he took part in (1962,1964,1966,1969). 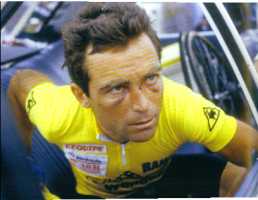 Bernard Hinault has worn the Yellow Jersey in more Tours than anyone else.

The other is the Badger himself, Bernard Hinault, who incredibly wore the Yellow Jersey in all eight Tours that he raced.

For the record, there are seven other riders who technically wore the Yellow Jersey in every Tour they took part in, but because they all only raced in just one edition, it’s rather less impressive. They are Alfred Haemerlinck (1931), Jean Engels (1948), Giovanni Rossi (1951), Julien Schepens (1960), Francesco Moser (1975), Alex Stieda (1986) and Lech Piasecki (1987).

Mark Cavendish will most likely bag a hatful of stage wins once more. If he wins four or more, as he has done in the past three years, he will join Eddy Merckx as the only man to have won four or more stages in four Tours in a row. And since Merckx’s haul includes plenty of time trials, Cavendish will become the first rider to win at least four road stages in four Tours in a row.

Thor Hushovd will be looking to win a Tour stage for the sixth year in a row which is something which has only previously achieved by five riders. Nicolas Frantz won a stage six years in a row in the 1920s. André Leducq, Miguel Indurain and Lance Amrstrong have all won stages in seven consecutive Tours.

But way out in front on this score is André Darrigade, who in the 1950s and 1960s won a stage in an incredible ten Tours in a row.

As unbelievable as it sounds, Philippe Gilbert has never won a stage of the Tour de France. With the trio of uphill finishes in the first week of this year’s Tour, he will be odds on favourite to set the record straight. He will become the first Belgian national champion to win a stage of the Tour since Ludo Dierckxsens in 1999. And he will be leaving the company of some of the other most successful riders never to have won a Tour stage – Giuseppe Saronni, Michele Bartoli, Francesco Casagrande, Claude Criquielion and Maurizio Fondriest.

George Hincapie will be starting his 16th Tour de France having completed all but one. This will tie him on Tour starts with Joop Zoetemelk, but the Dutchman finished all 16 of his. So Hincapie will have to finish this year and go for one more lap of France next year if he is to draw level with Zoetemelk on 16 Tours completed.

The group of geriatrics collectively known as Team Radio Shack will this year break the record as the oldest team to ever participate in the Tour de France. Previously this record was held by the 2004 Alessio-Bianchi team which included the likes of Andrea Noé, Fabio Baldato and Scott Sunderland. Their nine man Tour team had an average age of 33.13. Radio Shack came close last year with 33.03, but they will take the crown this year with an average age of 33.16.

Incidentally, the youngest team in this year’s race will be Francaise des Jeux with their riders averaging out at 26.34 years old. The youngest rider in the race will be 21-year old Anthony Delaplace of the Saur-Sojasun team while the oldest rider will be the wonderful Jens Voigt who is pushing 40. The oldest debutant in the race will be Jean-Christophe Peraud of the AG2R-La Mondiale team who starts his first Tour at the age of 34.

Finally, Nicolas Roche will be the only Irish rider in the race for the third year running. His appearance marks the 46th occasion that an Irishman will ride in the Tour but we have gone 20 years now without a stage win since Stephen Roche won in La Bourboule in 1992. The uphill finishes in the first week, might, just might, provide Roche with an opportunity to deliver that long awaited victory.

3 Responses to The Tour de France for stats geeks