1993 – The year a stage of the Rás finished in…Listowel

This article is the third in a series which will be published daily throughout the 2013 edition of the Rás. I’ve taken the finish town of each day’s stage and looked back through the history books to a time when the Rás previously raced into the same town. Other stage towns in the series are:

The Nissan International Classic had been organised every year since 1985, but what was effectively the Tour of Ireland did not go ahead in 1993. The race, organised by Alan Rushton and current UCI President Pat McQuaid, could not find a replacement sponsor after Nissan had pulled out and the race was cancelled. McQuaid said in January of 1993 while the search for a sponsor was still on:

“It’s not looking very good. All is not lost yet but time is running out. I’ll give it another few weeks but if no agreement is reached with a new sponsor by March or so we will just have to leave it aside for this year.”

No agreement was reached and the Tour of Ireland was left lying dormant until it returned to the cycling calendar in 2007. But trouble sourcing finance once again affected the race and it hasn’t taken place since 2009.

The national road race championship was won by Robert Power. He took the title over three laps of a 60km circuit around Castleisland in Co. Kerry.

Stephen Roche was about to take part in his last Grand Tours as he had announced he would retire at the end of the year. He finished the Giro d’Italia in ninth place and ended up in 13th place at the Tour de France. Both races were won overall by Miguel Indurain.

Roche in his final Grand Tour, the 1993 Tour de France

Tony Rominger won all three jerseys (G.C., points and mountains) at the Vuelta a Espana, becoming only the second rider to achieve this feat at a Grand Tour after Eddy Merckx at the 1969 Tour de France.

At the ripe age of 38, Gilbert Duclos-Lassalle won Paris-Roubaix in a two-up sprint with the Italian Franco Ballerini. The Frenchman won the Hell of the North by a centimetre in the Roubaix velodrome.

During the Rás, Niamh Kavanagh won the Eurovision song contest for Ireland in Millstreet, Co. Cork with a song called In Your Eyes.

Before the Rás, Albert Reynolds was elected Taoiseach as a coalition was formed between Fianna Fáil and the Labour Party, Bill Clinton became U.S. President, the World Trade Center was bombed and Jamie Bulger was abducted and murdered by two 10-year old boys.

After the Rás, the European Union was formally established, Sydney, Australia was chosen to host the 2000 Summer Olympics and The Snapper was broadcast on Irish television for the first time.

So who won the stage into Listowel?

The stage was won by the American Andy Lawson who was riding for a U.S. national team which included Dan Martin’s current team manager at Garmin-Sharp, Jonathan Vaughters. Lawson was only the second American ever to win a stage of the Rás after Greg Oravetz took two stages in 1987.

The fifth Stage of the Rás in 1993 was of the typical anarchic style for which the race has become famous. A king of the mountains prime at Bollingbrooke after just 15km of the 140km stage (the same mountains prime is in place on the 2013 route too) provided the launch pad for the incessant attacking that filled the rest of the day. Various breaks were instigated by Paul McQuaid, Paddy Callaly and Cormac McCann. But with seven kilometres left to go to Listowel, Lawson made his own move and forged clear of six other breakaway companions to cross the River Feale and reach the line with a handful of seconds to spare.

The stage into Listowel saw 19 year old Eamon Byrne take over the leader’s yellow jersey with a 28 second lead over Ian Chivers. This same lead remained unchanged until after Stage seven as Byrne’s confidence grew and grew. He had attacked from the mian bunch himself in order to bridge up to a breakaway: 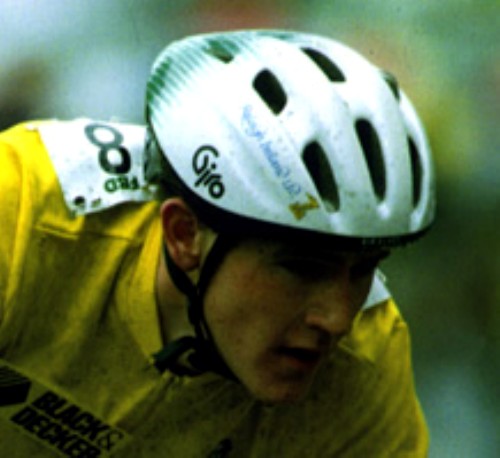 “It was better to be up the road than left sitting around. With the roads so narrow anything could happen in the wet and I wanted to be on my own setting my own pace.”

When asked was he worried about 1990 Rás winner Chivers and British criterium champion Neil Hoban who sat in second and third places overall, Byrne said:

“They look good but they’re not great. I’m not very worried about them as I am going really well.”

Byrne sealed the overall victory the following day in Blessington by finishing fifth on the stage and maintaining his lead over Hoban as Chivers faltered on the day and slipped to sixth overall. Byrne, from Templeogue in Dublin, appeared to have a bright future ahead of him but seemed realistic when asked about his plans after winning the Rás:

“[Before turning professional], I want to finish my training [in Irish Rail] first. It is no use going professional unless you are good enough, there is no point in entertaining false hopes.”

Regardless of what Byrne’s hopes were in 1993, his future in the sport was eventually cut short due to problems with asthma.