‘Financial doping’ is a term that was popularised by the Arsenal manager Arsene Wenger. He used the term a number of years ago in reference to Chelsea as the Frenchman watched his Premier League rivals sign player after player for millions of pounds as they took advantage of the relatively limitless funds at the disposal of owner Roman Abramovich. Rather than seek to gain a competitive advantage by doping their players. Chelsea, Wenger accused, were gaining an advantage by ‘doping’ their bank account.

This season, Wenger spent more money on any one player than any other club in the Premier League when he signed the German playmaker Mezit Ozil for £42,000,000. Has Wenger now emerged from the financially repressive shadows into the financial doping league with the big boys? Where’s the line from which you move from spending sensibly into financial doping?

Andy Rihs – finances the BMC team with his considerable wealth.

Obscenely rich owners have also become characters in the cycling soap opera more and more over the past few years as teams like BMC, OmegaPharma-QuickStep and Saxo-Tinkoff have all been bank-rolled by rich individuals with an enthusiasm for cycling. As the sport of football has (thus far unsuccessfully) attempted to curb this behaviour with a set of rules and disincentives known as ‘financial fair play’, no such set of rules have yet pervaded cycling. Even though cycling is considered to be at the forefront of the fight against performance enhancing drugs, the financial doping has yet to be addressed.

It begs the inevitable yet unanswerable question: what is doping?

An interesting article written by Malcolm Gladwell appeared recently on the website of the New Yorker where he ponders the situation where one human is simply born with a physical advantage over another human. An advantage which is magnified when the sport in which these humans choose to excel at requires this particular physical trait more than other professions. He ponders the scenario where one athlete may be born with better eyesight than another: Baseball – a sport where eyesight is crucial and surgically enhancible

“Eyesight can be improved—in some cases dramatically—through laser surgery or implantable lenses. Should a promising young baseball player cursed with normal vision be allowed to get that kind of corrective surgery? In this instance, Major League Baseball says yes…it turns the athlete into an improved version of his natural self….

“But when it comes to drugs Major League Baseball—like most sports—draws the line. An athlete cannot use a drug to become an improved version of his natural self, even if the drug is used in doses that are not harmful, and is something that—like testosterone—is no more than a copy of a naturally occurring hormone, available by prescription to anyone, virtually anywhere in the world.”

Cycling Weekly published an article in January 2007 about a keen cyclist, Darren Couch, who is also the director of optometry at a vision clinic in London. He said the following about cycling with glasses:

“I used to wear glasses for cycling. I had worn contact lenses full time from age 18 but developed an intolerance to them so could no longer wear them all day. Riding in the rain totally smeared the lenses so I couldn’t see and at night it was worse because of the glare from the beads of rain on the glasses. It made riding much more dangerous.

“Glasses don’t have full peripheral vision so you are not fully aware of people coming up behind you. I’d imagine it’s the same in a competitive environment… you will be less aware of who is around you.”

“Now I feel safer out on the road, less concerned in the wet and I have extra freedom when on my bike. After surgery there are no hassles or annoyances with vision and there is the added benefit of increased safety. I think eye surgery can provide an extra edge for short-sighted competitive cyclists”

These days it’s extremely rare to see a professional cyclist wearing glasses, presumably because any of them who do have issues with their sight have also undergone laser eye surgery or are wearing contact lenses. But decades ago when these solutions were not readily available, bespectacled cyclists were commonplace in the peloton – Laurent Fignon, Gerrie Knetemann, Jan Janssen.

One story involving Ireland’s Martin Earley demonstrates how wearing glasses had the potential to be a big disadvantage. In 1987, Earley was riding in the Tour of the Basque Country. Having won the third stage, he was in the race leader’s jersey. Heading into the final day’s 13.7km time trial he held an eight second lead over Acacio da Silva. But more likely to take Earley’s leader’s jersey, and the overall victory along with it, was Sean Kelly who trailed Earley by 16 seconds.

Kelly would have been considered a superior time triallist to Earley, but on this occasion the Dubliner seemed to be out-gunning the man from Carrick. But as Earley approached the finish line, disaster struck as fellow Irishman Stephen Roche explains:

“Martin is so short-sighted that he has to wear thick fogged glasses and on the last time trial stage of the Pays Basque his glasses became steamed up with the effort of the last 400 yards. Instead of riding down the finishing straight he followed the motorbikes into their designated area as they turned off before the finish. When he realised what he had done he fell off and lost his specs. He ended up on all fours fumbling around and that cost him second place on the stage”. 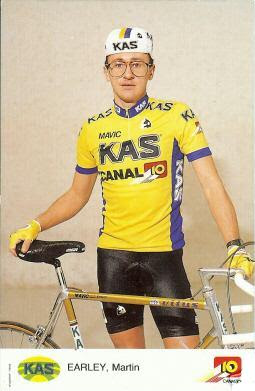 Martin Earley – glasses cost him a major victory in 1987

The mishap cost Earley a heap of time and he ended up losing 1’57” to Kelly on the stage which meant he ended the race in fifth place. Earley never won a professional stage race in his entire career. If he hadn’t been born short-sighted, he very likely would have won the 1987 Tour of the Basque Country.

In early 2009 shortly after Lance Armstrong had returned to the sport, he crashed in the Vuelta Castilla y Leon and broke his collarbone. A few days later, cyclingnews published a story declaring that because he was due to have surgery on his collarbone anyway, Armstrong took the opportunity to undergo a ‘radical, secret surgery to alter his physique to help cheat the wind’.

“The surgeons took two centimetres off of both collarbones and then screwed the bones back together. With the titanium plates holding the bones in place, Lance is already cleared to get back on the trainer. He was so eager to find out how much more aerodynamic he is that we flew straight away to San Diego to do some tests in the wind tunnel. And boy, oh boy, all I can say is watch out!”

This particular story was an April fool’s joke, but it is actually not that different from a procedure which Gladwell mentions in his New Yorker article:

“Major League Baseball also permits pitchers to replace the ulnar collateral ligament in the elbow of their throwing arm with a tendon taken from a cadaver or elsewhere in the athlete’s body…Tommy John, who, in 1974, was the first player to trade in his ulnar collateral ligament for an improved version. John used modern medicine to recover from injury and extend his career. He won a hundred and sixty-four games after his transformation, far more than he did before science intervened. He had one of the longest careers in baseball history, retiring at the age of forty-six. His bionic arm enabled him to win at least twenty games a season, the benchmark of pitching excellence.”

The moral lines between what is doping and what is not are constantly blurred. Should it not be considered doping simply if a substance is not on the banned list? What, morally, is the difference between laser eye surgery which could have aided Martin Earley and the fictitious surgical aero enhancement which could have shaved considerable time off Armstrong’s efforts against the clock? What, morally, is the difference between paying a rider £200,000 a year and paying him £2,000,000 a year?

Blurred lines have always permeated cycling, if only the sport itself could undergo corrective surgery to bring those lines of morality into focus.